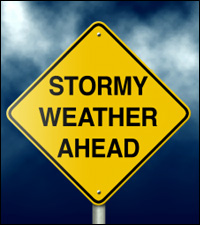 National Disaster Coordinator Carl Herbert is encouraging residents of St. Kitts and Nevis to stay tuned to official media sources as September is traditionally a busy month in the hurricane season.

The past week has seen Hurricane Earl impact the shores of the Federation with tropical storm conditions, and experts feared Tropical Storm Fiona ““ which followed Earl ““ would do the same. While the second threat did not materialize, officials are keeping a watchful eye on two other tropical depressions in the Atlantic Ocean.

“We have to remember that tropical systems are in the atmosphere. They are not in a building locked away [where] we have control of them and can say time to go or not go,” Mr. Herbert told SKNIS. “So we are urging people to pay attention to the forecasts.”

The unpredictability of weather systems was cited as one of the main reasons for constant monitoring.

“Recognizing that the science has not being perfected “¦ it is very important for persons to listen to the forecasts and do their preparations. Some people may say, oh but you know, the storm’s not coming close to us, but you never know, the storm may make a sudden direction shift which could bring it not just on our shores but in our backyard,” Mr. Herbert emphasized.

The National Disaster Coordinator encouraged residents to pay keen attention to the local weather forecasts as those produced by international services will not have the benefit of “on the ground information” to report. He stressed that this becomes even more critical during the passage of a storm.

“We at NEMA are very careful to follow the protocol, which is to work closely with our meteorological office at the R. L. Bradshaw International Airport, which in turn gets information from Antigua’s meteorological services which is the official source for the dissemination of information,” Mr. Herbert noted.

He added that if NEMA were to use secondary information which may result in people being hurt, then his Agency may be held liable. As such, Mr. Herbert encouraged all media houses disseminating information about an approaching storm to collaborate with NEMA to ensure the best advice, information and recommendations are passed to the public.