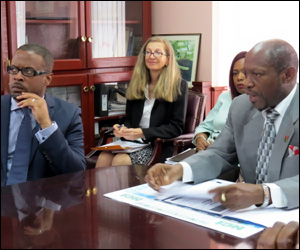 The early repayment is about one fourth (23.4 percent) of the SDR 47.4 million (about EC $197.6 million) that St. Kitts and Nevis borrowed from the IMF under its Stand-By Arrangement (see Press Release No.11/295). St. Kitts and Nevis borrowed less than the total amount approved under the three-year arrangement, equivalent to SDR 52.5 million (about EC $213.84 million), as the authorities began to treat the arrangement as precautionary in March 2014, during the combined seventh and eighth review. The amounts repaid early are obligations falling due in 2014 and 2015 under the original repayment schedule.

The authorities are to be commended for their economic achievements under the program. There has been a significant improvement in fiscal and debt sustainability and a strong economic recovery. St. Kitts and Nevis’ ability to repay the IMF ahead of schedule reflects the improvement in its macroeconomic balances that reflect both policy efforts and the strong inflows under the Citizenship-By-Investment program. This is the first time that a payment of this magnitude has been repaid early to the Fund by a Caribbean nation.

This early repayment will reduce the outstanding obligations of St. Kitts and Nevis to the IMF to SDR 36.3 million (about EC$ 151.3 million) or about 408 percent of quota and reduce its debt to GDP ratio by about 2 percent of GDP. This outstanding balance is projected to be repaid during 2014-2018.