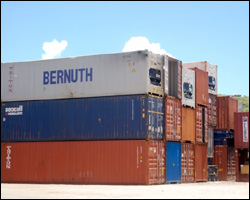 Although there were slight increases in construction material imported in April this year, the St. Christopher Air and Sea Ports Authority (SCASPA) says there were triple digit increases in cement and lumber offloaded at the Deep Water Port compared to the same month in 2009.

SCASPA’s Department of Finance and Statistics reports building material rose a slight 1.68 percent from 1,487 tons in April last year to 1,512 tons in April.

There was also a slight increase in general cargo, up 1.83 percent from 7,881 tons in April last year compared to 8,025 tons in April this year.

Five hundred and ninety-nine tons of non-alcoholic beverages were imported in April this year compared to 167 tonnes in April last year, an increase of 258.68 percent.