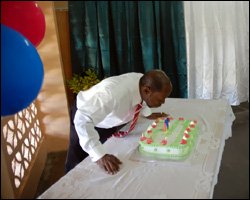 Students at the Saddlers Primary School and the Newton Ground Primary School sang happy birthday and, hundreds of residents phoned in birthday greetings to radio stations and delivered gifts or cards at his home or office, but St. Kitts and Nevis Prime Minister Hon. Dr. Denzil L. Douglas marked his 56th Birthday Wednesday with a Cabinet Meeting and a packed agenda.

At the Newton Ground Primary School, which also celebrated its 50th Anniversary on Wednesday, Prime Minister Douglas was wished Happy Birthday by his Deputy Prime Minister and Minister of Education, Hon. Sam Condor on his arrival and hugged and kissed by residents who attended the ceremony to mark the school’s milestone.

The students, teachers, parents sang happy birthday before asking Prime Minister Douglas, who is also the Parliamentary Representative for the area, to blow out the candle on the cake marking the school’s 50th Birthday.

At the Saddlers Primary School, students and teachers sang the birthday song and teacher Kira Mason, presented the St. Kitts and Nevis leader, with a gift and a bottle of sparkling cider.

Prime Minister Douglas in brief remarks thanked the students and their parents for their support over the years and pledged his continued commitment to the development of the constituency.

On arrival at his office, Prime Minister Douglas was wished happy birthday. He chaired a meeting of the Cabinet and met investors, religious leaders and residents.

Dr. Douglas is expected to be guest at a Dinner in his honour hosted by the Ambassador of the Republic of China on Taiwan, His Excellency Mr Wu.