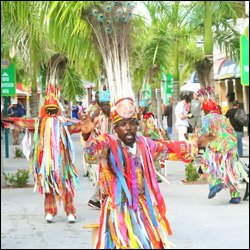 The Caribbean islands of St. Kitts – Nevis are preparing for an explosion of cultural excitement and creativity in December during the annual national carnival celebrations to be held between 18 December 2009 to 2 January 2010.

The two week carnival event brings the island to life from its  opening ceremony on 18 December, to the highly acclaimed Boxing day celebrations, through to the Grand New Year’s Day Parade, and finally culminating in the closing street party Jump Up on 2 January 2010, known by locals as “Last Lap”.

This unusual tradition of simultaneously celebrating Christmas and carnival is one of the several characteristics that make St. Kitts such a special Caribbean island to visit.

Hundreds of returning nationals and visitors are expected to head for popular Carnival events in the run up to the Christmas holidays, as Carnival moves in to high gear.  One of the highlights is the J’Ouvert Jam on Boxing Day when local soca bands hit the road from the early hours of the morning and circle the major roads in Basseterre as thousands either line the route or jump to the Road March contenders.

This music and dance mania is replaced at midday by dozens of masquerades and other traditional folklore dancers who entertain onlookers throughout the capital city of Basseterre.

Sunday 27 December is the Female Calypso Bacchanal and Best of the Rest Show; Monday 28 December, the National Carnival Queen Pageant with contestants from across the region and the US and Tuesday 29 December brings in the National Calypso Monarch Finals.

Closing in on the New Year, Wednesday 30 December sees the Folklore Avenue Extravaganza and finally on Thursday 31 December, one of the key highlights for the youngsters is the Children’s Carnival Parade.

Finally, New Year’s Day is witnesss to the Grand Carnival Parade with the Last Lap and Final Jump Up taking place on January 2nd 210.

Commenting on this year’s preparations, Minister of State for Tourism, Sports and Culture, Richard Skerritt, said “Carnival is a great time to visit St. Kitts at the start of the winter season; it’s also an opportunity to share the islands folklore history, and musical talent.”

But the National Carnival would not be possible without corporate sponsors like LIME, formerly Cable & Wireless. Terrence Crossman, VP Corporate Sales for LIME, says the telecommunications provider continues to support National Carnival because of the role it plays in protecting the island’s cultural traditions and developing a strong national identity.

“National Carnival is vital to St. Kitts and Nevis’ brand development,” said Crossman.  “Therefore, as the leading telecommunications company in the Federation ““ which is due in part to the strength of our own brand ““ we recognize the value of National Carnival and continue to pledge our commitment to it,” he added.