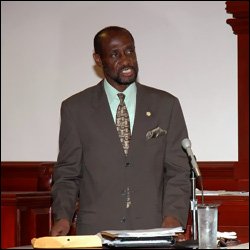 Lawmakers in St. Kitts and Nevis go back into session this coming Thursday to finish business that were not completed during the sitting last week.

The National Assembly, presided over by Deputy Speaker, the Hon. Patrice Nisbett in the absence of the Speaker, on November 5th passed legislation dealing with the qualification of members seeking election to the lawmaking body, anti-terrorism and money laundering.

When the House meets this Thursday 12th November, lawmakers will debate an amendment to the Firearms Act No. 23 of 1967, which is being changed to reflect the policy of the Government to protect the citizens and to maintain peace, order, liberty and to promote public safety.

The amendment, which is part of the ongoing effort to reduce, if not totally eradicate crime and violence in St. Kitts and Nevis, will see Prime Minister and Minister of National Security, the Hon. Dr. Denzil L. Douglas propose an amendment to Section 20 of the Firearms Act to make provision relating to the smuggling of firearms into St. Kitts and Nevis.

The Bill seeks to address the element of illegally obtaining and being in possession of firearms by classifying this as the offense of smuggling and providing stiff penalties for its commission.

A person found in possession of firearms that are not licensed under Sections 4 or 20 or exempted under Section 8 of the firearms act  or accounted for under the Customs (Control and Management) Act, is deemed to have committed the offence of smuggling firearms into the Federation.

The charge of smuggling firearms is in addition to any other charge under the Act, including a charge of possession.

Smuggling firearms under the proposed sub section 20 (6) is according to the existing subsection (5), a strict liability offence and the Crown shall not be required to prove mens rea in proceedings brought pursuant to then said subsection (6).

Deputy Prime Minister and Minister of Education, the Hon. Sam Condor will amend the Clarence Bryant College Act No 9 of 2009.

He will propose to amend Section 1 of the Act, by expressly empowering the Minister responsible for Education, to bring different Sections of the Bill into operation at different dates.

The National Assembly is also being asked to amend Section 21 of The Cemeteries (Amendment) Act to make provisions to further protect and maintain the sanctity of the public cemeteries in St Kitts and Nevis.

Minister of Health, Social and Community Development, the Hon. Rupert Herbert proposed amendment, together with other existing legislation, to make a clear statement with respect to the type of conduct which is acceptable in public cemeteries.

It is an offence to play games or sports, discharge firearms, disturb a funeral or other memorial ceremony or commit any other type on nuisance within a cemetery pursuant to section 21.

Public cemeteries are open to the public from sunrise to sunset pursuant to regulations, smoking is strictly prohibited within a cemetery and persons must conduct themselves in a quiet, orderly manner and must not stand or sit on the gravestones or enclosure walls of the cemetery and must enter or leave through the gates.

The National Assembly will also deal with The Merchant Shipping (Amendment) Bill, 2009, which stands in the name of Minister of Public Works, Utilities, Transport & Posts, Dr. the Hon. Earl Asim Martin.