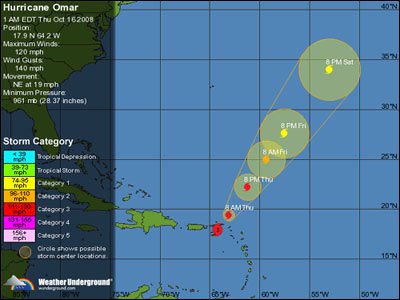 St. Kitts and Nevis Prime Minister and Minister of National Security announced the closure of all schools and government offices and the mobilisation of the National Emergency management Agency (NEMA) and the various District Committees as Hurricane Omar bears down on the twin-island Federation.

In a mid-morning national broadcast, Prime Minister Douglas said on its present track, the center of the storm should pass about 120 miles North West of St. Kitts and Nevis, late (Wednesday night) or  early (Thursday) morning.

“Weather advisories indicate that Omar is expected to produce 4 to 8 inches of rain, gusty winds, rough seas and battering waves to countries in the Northern Leeward Islands,” said Dr. Douglas, who urged everyone to take all measures to protect life and property.

“Resident living on the western coast line should pay close attention to the progress of the storm and be prepared to move further inland if necessary.  I further urge all residents and citizens to quickly complete preparations and stay indoors, avoid flooded areas and water courses such as, ghauts and rivers, as the Hurricane approaches and even after its passage,” said Prime Minister Douglas.

He announced that the Ministry of Education has been advised to close all schools and colleges by midday and to make arrangements for students to be transported to their respective homes.

“I am also directing that all Government offices be closed at 2:00 p.m. to allow all civil servants the opportunity to make necessary preparations. Heads of essential services should be mobilized as necessary in times of emergency,” said Prime Minister Douglas, who also appealed to the “business community to assist the general public in procuring emergency supplies and to allow their employees adequate time to make the necessary arrangements to secure their families and their homes.”

“Let me remind families with senior citizens and children to ensure that they are safe and comfortable at this time. I also call upon the various District Committees to be mobilized and pay special attention to those senior citizens living on their own,” said Prime Minister Douglas.

He assured residents that there is no need for panic and to listen.