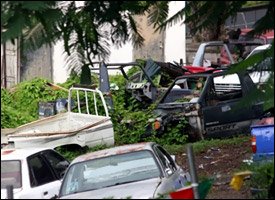 Derelict Vehicles To Be Removed From Nevis

A number of persons on Nevis have taken advantage of the one month amnesty period for the disposal of derelict and abandoned vehicles but Manager of the Nevis Solid Waste Management Authority Ms. Carlyn Lawrence said the response has been less than satisfactory from garages and auto repair shop owners on the island.

Ms. Lawrence told the Department of Information on October 13, that the Authority had embarked on the campaign for the month of October, in an effort to recycle and export an estimated 1000 abandoned vehicles, in its attempt to keep the island clean and healthy.

“We want people to take advantage of the amnesty period since we relaxed all fees associated with this. We have even relaxed our regulations because normally in order for us to take an abandoned vehicle, we would require the owners to de pollute the vehicle by removing all the fluids and the tires etcetera but we will take the vehicles as is,” she said.

The abandoned vehicles Ms. Lawrence noted had become havens for rodents and mosquitoes and a health hazard.

She said the Authority had for the first time in its history entered into a contractual arrangement with a company that would recycle the scrap metal. The company was based in St. Maarten.

“They are going to bring the equipment to compress the vehicles and also bring a vessel to sail the old junk cars away from our shores which to me is a win, win situation,” she said.

The Manager explained that much of the equipment necessary for effective waste management was costly. Therefore a company in the region which owned the equipment that was willing to conduct business with the Nevis Solid Waste Management Authority was a blessing.

She said the Authority had previously embarked on a similar project to recycle led acid batteries.

According to Ms. Lawrence, recycling was one of the key processes that would increase the longevity the Long Point Land field. There were a number of issues with regard to waste management on the island and when the landfill opened in 2003 it was given a lifespan of about 15 years.

She explained five years later the landfill was nearing capacity because there had not been a concerted effort to recycle, reduce and reuse in the past. Mrs. Lawrence said if the island continued to generate a lot of waste and not find effective solutions to handle some of it, there would be a constant need for additional lands for managing waste. As a result there would be less land for other development.