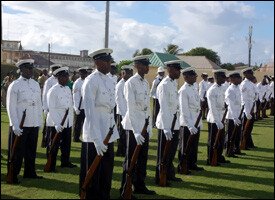 Law enforcement officers in St. Kitts and Nevis have been challenged to confront the spiraling increase of violent and gun related crimes as an attack on their own capability to effectively sustain peace in the various communities of the twin-island Federation.

St. Kitts and Nevis Prime Minister Douglas in a special message to the members of the Royal St. Christopher and Nevis Police Force and the St. Kitts-Nevis Defence Force to mark the 26th Anniversary of Independence listed the financial and other resources provided over the years and vowed his government is not prepared to allow gang on gang warfare to derail the gains that have been made through hard work, foresight and commitment, after twenty six years as an independent country.

“Draw on your land based and maritime training to successfully implement your plans of action. Your interoperability with the other agents in Security Forces is critical to rebuilding the confidence of our people in your ability and capability to protect them and safeguard our land,” said Dr. Douglas.

Expressing disgust with what he said was the senseless killing and irresponsible violent encounters among warring gang members, Dr. Douglas said that this form of deviant behavior has no place in the transformation process of a progressive country as St. Kitts and Nevis.

“You have all been trained to curb the senseless lack of respect for human lives and to quell the open warfare that is being waged among rivaling gang members. You must continue to unite and take action to stamp out this scourge of gangsterism that is foreign to our culture.  Take back our streets!  You must all be vigilant at all times, for there are those who would want to continue to smuggle guns into our country and would stop at nothing, including arming our young men, thus causing them to use brute force in resolving their petty conflicts.  You must remain focused and loyal to your charge,” said Dr. Douglas.

“Those who challenge the integrity of St. Kitts and Nevis must be confronted. Those who continue to terrorize our citizens must be held accountable for their reprehensible acts. As officers charged to ensure that law and order are upheld, you must exercise your duty responsibly and professionally. Government has invested significantly in your training. Crime prevention and detection is your mission; safety and security is your watchword. The Government, citizens and residents of this country are your clients. Let us work together. The community is willing, our international partners have given their commitment to support us. You must take up the mantle and lead them back to embrace you and rebuild confidence and confidentiality as guiding principles for the way forward. You owe it to the people! You owe it to your families! You owe it to this our proud nation,” said Prime Minister Douglas.

He said that the senseless gun-related acts of violence are not only new and challenging to the Caribbean region but are also destructive.

Prime Minister said his government is not prepared to allow gang on gang warfare to derail the gains that have been made through hard work, foresight and commitment, after twenty six years as an independent country.

“As a Government we have committed and availed the financial and technical resources to you the security technocrats to enhance your operations,” said Prime Minister Douglas, who noted that the Ministry of National Security recently outlined its comprehensive policy for safety and security that covered the policy objectives and operational directives that will strengthen the crime prevention and detection mechanism.

“Driven by our own mandate, we have embraced a stronger partnership with stakeholders at the ministerial and community levels as part of an integrated approach in addressing youth crime and in assisting our youths. The Government through the Ministry of National Security has committed its support and resources for several initiatives designed to address the escalation of crime, especially firearm related crimes,” said Prime Minister Douglas.

Dr. Douglas, who is also the Minister of National Security pointed to several developments and initiatives have taken place recently.

“The establishment of a Homicide Unit in the Police Force to focus on the investigation and prosecution of criminals who have been charged with homicide, thus improving your ability to solve and successfully prosecute offenders; establishment of a crime pattern analysis database to assist with your understanding of the causes and trends of categories of crime to inform our response and prevention strategies; establishment of an Anti-Gang Unit which will focus on gang, gun and drug related crimes and community policing with increased focus on youth crime prevention through outreach programmes designed to build partnership with community based groups in strengthening our crime fighting efforts,” said Dr. Douglas.

He said that law and order through the enactment of relevant legislation that will serve as deterrent to crime and improve safety and security has been improved and stiffer penalties will be imposed for firearm related crimes.

Dr. Douglas said that the Intelligence Unit in the Force has been strengthened to allow for an operational arm as well as an intelligence gathering arm.

The Strike Force is a part of this Unit. Cyber crime capabilities of the forces through training have been enhanced and the rehabilitation programme of the penal system to reduce recidivism has been improved. There has been a review of the operations of the Drug Council programme and the strengthening the management structure of the law enforcement agency.

Commenting on the operational approach, Prime Minister Douglas alluded to the increased vigilance throughout the communities of the Federation to contain the escalation of all types of crime through Strategic Action.

“For example, increased public awareness; mobilisation of a quick response team such as Strike Force; increased patrols throughout our communities etc and counter the proliferation of illegal firearms that fuel the increase in homicides through gang warfare.

He also referred to the strategic action in the intensification of stop and search in known hot spots; e-tracing of firearms that have been intercepted by security forces and increased use of the canine unit officers at the ports and an increased in maritime patrols.

Prime Minister Douglas told the law enforcement officers that their duty is to defend the safety of the people and the integrity of St. Kitts and Nevis.

“I call on you, the Security Forces, to take up your charge to safeguard the lives and investment of this country. Your 24/7 operations must not only enhance your visibility but must yield the results of your strategic interventions and engagements in the communities of this country,” said Dr. Douglas.