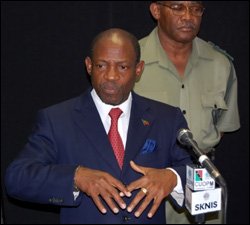 “Our justice system allows the police to carry out investigations into a crime. If enough evidence is found to charge someone of an office, they receive a fair trial with the assistance of appropriate counsel and tried by a jury of their own peers and the appropriate sentencing is pursued if found guilty,” said Prime Minister Douglas., adding: “It is not for me to say what kind of sentence that can be meted out to persons convicted of capital crime.”

“I wish to emphasise just in case it has escaped anyone that the government continues as a policy not to remove the death penalty from our law books,” said Prime Minister Douglas at a rare night time Press Conference held in the wake of two brutal killings earlier in the day.

He gave the assurance that “if it is the sentencing of the Court that capital punishment is meted out then the appropriate warrant, I am sure, will be given for such to be carried out.”

Prime Minister Douglas, who is also Minister of National Security,  noted that when the sentence of capital punishment was carried out last December, on the order of the court, there was an outcry from some quarters including Amnesty International, but overwhelming support in St. Kitts and Nevis.