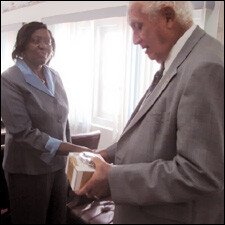 On July 23rd 2009 Mr. Charles Brisbane presented 100 pairs of handcuffs to the Royal St.Christopher-Nevis Police Force.  In handing over the equipment to the Permanent Secretary in the Ministry of National Security Mrs. Astona Browne, Mr. Brisbane said that it was his pleasure to make his second donation to the Police, and hoped that they will be used to assist the police in their duties and functions which necessitate the use of such equipment.

PS Astona Browne in accepting the gifts on behalf of the Min. of National Security thanked Mr. Brisbane for the gesture.  She said that this was the spirit of cooperation the Ministry appreciates, when responsible citizens can see their role as part of the law enforcement process to assist in making our communities safer.  She assured Mr. Brisbane that the handcuffs will go a long way in facilitating the job of law enforcement.  The handcuffs were then presented to ACP Richardson to be utilized by the Police Force.

At a sitting of the Basseterre Magistrate Court on Wednesday 22nd July 2009, the following persons were convicted and sentenced as follows:

1. Joseph Fahie of Market Street was sentenced to prison for three years each for possession of firearm and possession of ammunition.  Both sentences are to run concurrently.  Fahie was arrested on July 20th 2009, when he was stopped and searched by the Police and found to be carrying the illegal weapon.

2. Vinceroy Chumney of West Street was sentenced to prison for one year, for larceny committed on April 12th 2009.  His sentence is to run consecutively with the current sentence he is serving.

3. Tyrone Fyfield of Ponds Ext. who was charged with possession of cannabis was fined $4,000.00 in six months or in default six months in prison.

5. St. Clair Bartlette alias Clairy of Molyneaux who was charged with possession of cannabis was sentenced to prison for one month.

7. Guy Wattley of Saddlers was fined $750.00 in two months one month in prison for driving without due care and attention on May 20th 2009.