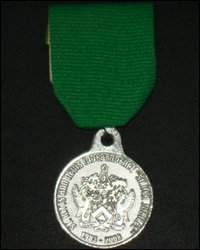 On Monday 14th September 2009 during the Commissioner’s lecture to ranks of the Royal St.Christopher-Nevis Police Force, Commissioner Williams presented 13 officers who have served the organization from 1983 to 2008, with Independence medals. The officers receiving the awards were Deputy Commissioner Stafford Liburd, Assistant Commissioners Joseph Liburd and Joseph Richardson, Superintendents Raymond Cotton and Wilmoth Hodge, Inspectors Zenhastel Hector, Keithly Bradshaw and Franklyn Belgrove, Sergeants David Allen, James Tyson, Lanston Jeffers and Trevor Carey, and Corporal Oral Liburd.  The medals will be eventually presented to all officers who served the organization for the period 1983-2008.
The Commissioner also introduced 24 new recruits who have recently commenced basic training at the Police Training School.

During the lecture, Commissioner Williams revealed that a committee, chaired by the Deputy Commissioner was established to plan activities to celebrate the 50th anniversary of the Royal St.Christopher-Nevis Police Force, which began operation on January 1st 1960.

Assistant Commissioner Richardson also addressed the men and thanked them for their efforts in making the island wide operation on September 11th, the success that it was.  He explained that other operations will be conducted weekly, though not on the same scale, but having the same objectives.

Assistant Commissioner Liburd, officer with responsibility for crime, reminded the officers that crime fighting is the business of the Police.  He praised officers for their hard work and dedication to the service.  He also commended those officers who have gone the extra mile and have literally put their lives on the line to maintain law and order.  He made specific mention of PC Caldon Duncan who single handedly seized an illegal firearm from an individual who is now serving time in prison.  He also made mention of the officers of the drug squad who responded to the sound of gunfire, and was able to seize an illegal assault rifle.  He explained that these men could have easily become victims in the line of duty.  ACP Liburd highlighted the fact that crime is down generally in the Federation, but incidents involving firearms and murder continue to be a challenge to law enforcement.  He closed his remarks by admonishing officers to continue to be true to their oath, and execute their duties with courtesy and professionalism.

Deputy Commissioner Liburd thanked officers who endured the inconveniences of working in the guard room during the renovations, for their patience, and urged them to cherish the comfort of their new surroundings.  He also spoke of the importance of discipline in the organization, and the re-introduction of the plain clothes patrol in certain residential areas in Basseterre.  This he said was important to ensure the safety and comfort of residents.

The meeting ended with a lively question and answer session.

At about 12:30 am on September 14th Police responded to a report of shooting at Central St.  Investigations revealed that Devon Jeffers aka Marvin Jeffers was shot in the leg at the junction of Central Street and Shaw Avenue.  He was taken to the JNF Hospital where he was treated and warded in stable condition.  No one has been arrested.  Investigations are ongoing.