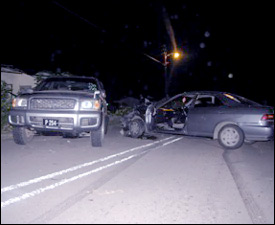 On Monday 25th April at approximately 8:35 am police at Old Road received a report of a homicide at Godwin Ghaut. As a result police officers from the District “˜B’ Crime Response Unit, Old Road Police Station and the Sandy Point Police Station responded to the scene immediately. Police enquiries revealed that 30 year-old Shervin Williams of Godwin Estate formally of Middle Island was found lying on his left side on a dirt road in a remote area above the railway and in the vicinity of the Godwin Ghaut Bridge. According to investigators, Williams had obvious injuries to the neck and head that appeared to be those caused gunshot. The District Medical Officer visited the scene and pronounced Williams dead. The Coroner was informed and gave permission for the body to be removed to a funeral home under police escort. The scene was processed by officers from the Crime Scene Department and items of evidential value were collected and taken into police custody for further analysis. There are no suspect(s) in police custody at this time but investigators are following up on a number of leads. Investigations into this matter are ongoing.

Police at the Tabernacle Police Station are investigating a traffic accident which occurred at Mansion at approximately 7:15 pm on Sunday 24th April 2011. The circumstances of the accident are as follows:

The scene was processed and measurements and explanations were recorded. Investigations are ongoing.