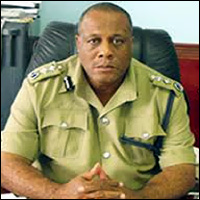 Police early Saturday morning held two men and freed a woman less than 24 hours after she and her husband were taken from their home.

The husband, Larry Vaughan was freed and dropped off on the Kim Collins Highway at 5:30 a.m. Friday two hours after he was held.

According to Deputy Commissioner of Police, Mr. Stafford Liburd, three weapons and several rounds of ammunition were also found in an abandoned house where the woman, Gilda Rawlins-Vaughan was found.

In a statement, the senior police official said the two men entered the home of Larry Vaughan and Gila Rawlins-Vaughan of Sea View Housing and removed them from the premises.

At around 5:30 that same morning, Mr. Vaughan was released on the Kim Collins Highway.

Following the report, the Strategic Intelligence Unit, the Delta Squad, the Criminal Investigations Department (CID) and the St. Kitts-Nevis Defence Force formed a joint crisis team using all human, technological and other assets at their disposal to rescue the victim unharmed.

The Joint Security Forces executed an operation at 3:15 am on Saturday 29th October at an unoccupied house at East Park Range and rescued the victim who was immediately taken to the Joseph N. France General Hospital where she was medically examined and later released.

During the operation, the Security Forces subdued two young men, Jermaine Riley and Ali Percival of Soho and Cardin Avenue respectively ““ but who both reside at Soho. Both have been taken into police custody.

During the operation the Security Forces subdued two young men and have retrieved three weapons and more than 75 rounds of assorted ammunition.

A third person has been held for questioning and is assisting in the ongoing investigation.

The full force of the law will be brought to bear on these individuals who will be formally charged.

The Royal St. Christopher and Nevis Police Force expresses thanks to all those who have assisted in the investigation and the safe return of the victim.

The Security Forces regret the action of the perpetrators and the stress caused to the victims and family as well as the unfounded speculations that ensued.