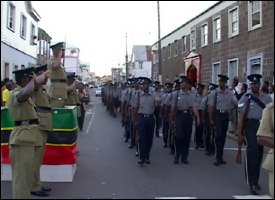 The computerization of the Royal St. Christopher and Nevis Police Force continues and the recent acquisition of 20 computers will significantly enhance operations.

Inspector Cromwell Henry told SKNIS that the computers, purchased by the Government, will facilitate greater efficiency and assist with information storage, analysis of evidence and officer reporting.

The police inspector added that computerized records will also allow greater data networking between local law enforcement and their regional and international counterparts.

In order to facilitate this, 13 of the 20 computers were assigned to the Immigration Department which processes persons entering and leaving the Federation.

Specialized software is to be acquired to aid this process and officers will undergo training to ensure proper usage, which adds to the reliability of tests.

Members of the security forces have also undergone training in areas such as cyber crime, fraud, and terrorism in 2008.

In a recent interview, Prime Minister and Minister of National Security Honourable Dr. Denzil Douglas revealed that greater partnership is being forged with international institutions including the Royal Canadian Mounted Police, in a bid to strengthen crime prevention, detection and solution strategies.

Government is also expected to outline additional resources for law enforcement in the 2009 Budget.