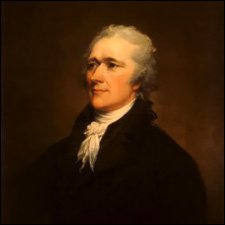 St. Kitts and Nevis’ Prime Minister Hon. Dr. Denzil L. Douglas made history Tuesday by raising the Federation’s flag in Manhattan and laying a wreath at the graveside of Alexander Hamilton, the Nevisian-born founder of the United States of America.

Alexander Hamilton has been called “America’s most important immigrant.” Prime Minister Douglas commented, “Today we recognize the role of Alexander Hamilton, a citizen of our twin-island Federation.  “It fills me with great pride to be able to participate in the events of this day, to pay homage to one of our great citizens and to see the flag of St. Kitts and flying high above downtown Manhattan.”

Beginning with a visit to the Museum of American Finance, Prime Minister Douglas and Senator Skerritt reflected on Hamilton’s role in establishing the US Federal financial system that would serve as the cornerstone of the US economy.  The delegation then made a brief stop at Federal Hall, site of the first US capitol and where Hamilton became the first US Secretary of the Treasury in 1789.

“With Caribbean Week taking place in New York City and June also being Caribbean-American Heritage month, it seemed only appropriate for us to gather in recognition of one of the most prominent historical personalities ever to hail from the Caribbean, Alexander Hamilton,” said Senator Skerritt.  “This is truly a historic occasion that illustrates an inextricable link between the Caribbean and the United States.”

Next, the dignitaries moved to Trinity Church to visit Hamilton’s grave site, joined by Hugh Riley, Secretary General of the CTO.  There, Senator Skerritt delivered brief remarks recognizing both Hamilton’s role and the link he provides between St. Kitts and Nevis and the United States of America.

Reverend David Simon offered a brief invocation, after which Prime Minister Douglas personally laid a wreath at the side of Hamilton’s grave.  Following a short walk to Bowling Green, site of the famous Wall Street Bull statue, Prime Minister Douglas gave a short speech and raised the flag of St. Kitts and Nevis, where it would then fly alongside the flag of the US for the remainder of the day.

To conclude the commemorative activities, participants and media guests were treated to lunch at Fraunces Tavern, former site of certain offices of the US Department of the Treasury during Hamilton’s day.

In recent months, St. Kitts – Nevis was named a top destination for 2011 by both AOL Travel and British Airways.