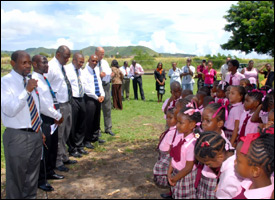 Government Ministers in St. Kitts wrapped up two days of visits to primary and secondary schools and the C.F.B. College on Tuesday, and Minister of State for Information Honourable Nigel Carty described the event as “enjoyable and nationalistically stirring.”

The visits to the educational institutions are done every year at Independence time although the hectic schedule was scaled down a few years ago, to include secondary schools only. As this year’s occasion marks the silver jubilee anniversary of Independence of St. Kitts and Nevis, Minister Carty said that it was important for the touring party headed by Prime Minister Honourable Dr. Denzil L. Douglas to visit all thirty schools.

Appearing on this week’s edition of Perspectives, the Minister of State for Information said the teachers, students and parents on hand were assured of Government’s commitment to provide quality education.

“There was a very strong message that this is the 25th Anniversary of Independence. We have achieved a great deal through the hard work of our forebearers and persons who went before us in leading the government of St. Kitts and Nevis,” he explained.

Appreciation was also expressed to the teachers and parents who were acknowledged as a very important part of the national development structure.

Each Minister made several presentations at various schools. This called for creativity, particularly when trying to relay the importance of achieving 25 years of nationhood to the younger children in primary schools. Visits to the senior schools involved more policy-related matters and Minister Carty, who assumed responsibility for education in the August Cabinet portfolio reshuffle, revealed that the students were apprised of the plans to modernize teaching in the classroom.

“We are planning to use technology as one of the ways to catalyze learning and to interest students to a greater degree to be able to use hands on experiences to provide learning,” the senior government official said. “What we are doing now is making sure that we strike the appropriate partnerships between the Department of Technology and the Department of Education to develop curricula that “¦ embraces and infuses technology.”

Details of the synergies between education and technology are outlined in the National Information and Communication Technology Strategic Plan which was adopted in November 2006.

“I am confident that we are on the right path,” Minister Carty stated. “I think the message is clear that we have got to really focus our attention on what the next 25 years mean for the people of St. Kitts and Nevis. We have come thus far because many people have applied themselves. Teachers, law enforcement officers, leaders of society and ordinary citizens.”

Citing crime and globalization as major concerns, the Minister of State stressed that  “We [as a nation must] prepare ourselves and equip ourselves with the skills that are going to help us to face the challenges of tomorrow and will [lay] a foundation for ourselves and those who will come after us.”