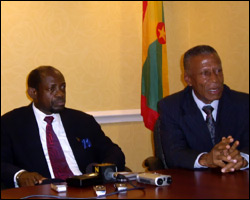 Dr. Douglas will join his colleagues for the meeting at the Bay Garden Resort in Gros Islet.

The meeting, which will be chaired by OECS Chairman, Grenada’s Prime Minister, Hon. Tillman Thomas, will discuss the proposed economic and eventual political union of Grenada, St. Lucia and St. Vincent and Grenadines and Trinidad and Tobago.

Prime Ministers Manning and Thomas have visited St. Kitts and Nevis to brief Prime Minister Douglas on the matter.  Visits have also been made to other OECS and CARICOM nations.

Prime Minister Douglas will be accompanied by Executive Officer in the Office of the Prime Minister, Mr. Crios Freeman.