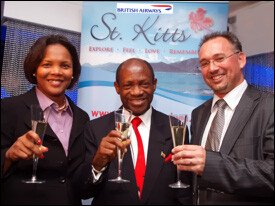 Prime Minister of St. Kitts and Nevis, the Hon. Dr. Denzil L. Douglas, paid a special visit to the UK this week and attended the official launch in London for a second British Airways service to St. Kitts – Nevis.

The celebratory event, held at Club Twenty Four on 6th October, was jointly hosted by the St. Kitts Tourism Authority and British Airways and attended by the UK travel media and trade partners, including tour operators, hoteliers and agents.

The second weekly BA flight into St. Kitts, announced by British Airways in August 2009, represents a significant step forward for St. Kitts tourism, coming at a time when global tourism is still in crisis.

The announcement comes on the heels of the recent inaugural service in January 2009, which brought more than 4,000 passengers into St. Kitts’ Robert L. Bradshaw International Airport for the first half of this year.

Speaking at the launch event, Prime Minister Douglas expressed his gratitude to British Airways for their on-going commitment and support, citing the special relationship already developed.

“This solid partnership supports us in our efforts to increase tourist arrivals substantially from the UK and European markets and, more significantly, to help us maintain the upmarket quality of the St. Kitts brand image,” the Prime Minister said.

On the global economic environment, Prime Minister Douglas discussed the impact it was having on the tourism industries of small countries such as St. Kitts.

“We intend to meet these challenges head on to ensure that St. Kitts & Nevis remains strong economically, with key strategies in place for a new period of sustained growth and development,” Douglas said. “We believe that we can only succeed in this endeavour by working in smart partnerships like the one we have developed with British Airways and ensure that as partners we are committed to a long term and lasting relationship.”

“It is heartening that since we launched our first flight to St Kitts in January this year we have seen numbers grow from strength to strength,” Lacy said. “In this difficult climate this is a testament to the efforts of the team at the tourism authority and the hotel partners here tonight in developing strong marketing and PR campaigns to build the awareness of the destination.”

Also in attendance at the event were His Excellency James Williams, High Commissioner for St. Kitts-Nevis to the U.K.,  together with Chairman of the Tourism Authority Board, Alfonso O’Garro; CEO, Rosecita Jeffers; Board Member, Claire Rawson and the UK marketing and Public Relations team.

British Airways began its scheduled Saturday service to St. Kitts on January 10, 2009.  The new additional Tuesday flight, starting on 23rd March 2010, tagged with Antigua, will immediately increase capacity to the St. Kitts and Nevis destination, while offering even greater flexibility to the duration of visitor nights.

British Airways will use a similar configuration to the existing Saturday flight with a three class, 280 seat Boeing 777 aircraft holding 40 Club World seats, 24 World Travellers Plus and 216 World Traveller seats.