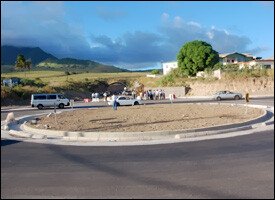 Dr. Douglas said the project is yet to be completed as several new additions had to be made to accommodate, facilitate and respond to the obvious growth in the new communities that were not included when the project was first designed.

“One of the important areas that I have been very impressed with is the additional work that had to be done to accommodate the housing growth in the Shadwell and Buckleys areas, and in particular, the need to circumvent the original main road leading to St. Peter’s and linking a new road around the original St. Peter’s Road, with what is happening in the Shadwell area,” said Prime Minister Douglas at the end of the tour which started from the round-a-bout at Gillard’s Gas Station and ended at the new round-a-bout on the Island’s main road just outside of Buckley’s Estate.

Dr. Douglas, who was accompanied by Minister of Public Works, the Public Works Department, the Caribbean Development Bank and the contractors, is of the view that tremendous support has been provided to the government’s request to facilitate the demands from persons in the various communities that the new highway would serve.

“I am satisfied that it was necessary to introduce two or three new round-a-bouts, which were not in the original design and these are to ensure that roads users would be safe,” said Dr. Douglas, who added that business community has also been accommodated.

He said that the land in the back of the Caribbean Cinema Complex in the Buckley’s area is earmarked for business development and it became necessary to construct a new round-a-bout in order to make those new businesses accessible via safe entry and exit routes.

Dr. Douglas said the project is nearing completion and the government is satisfied that tremendous work and planning have gone into the realisation of this project.

He used the opportunity to commend Minister of Public Works, Dr. The Hon. Earl Asim Martin; the team from the Public Works Department led by the Director of Public Works, Mr. Calvin Pemberton, the Caribbean Development Bank (CDB)-provided consultant, as well as the overseas and local engineers who have provided a highway for the new road network which will become necessary for the new residences and the new businesses that are envisaged.

“This is a clear demonstration that St. Kitts and Nevis is working,” said Prime Minister Douglas.

Government secured a loan from the Caribbean Development Bank to construct the West Basseterre By Pass Road also ease the flow of traffic from the airport to certain western areas on St. Kitts.

The road should substantially reduce the time for people in this part of St. Kitts to travel to the airport or Basseterre and Government envisaged much of the unoccupied lands in the areas of West Farm, Dewars and Olivees will become opened up for residential and commercial development.

Motorists began using the area of the West Basseterre By-Pass Road from the Robert L. Bradshaw International Airport round-a-bout at the junction of the Kim Collins Highway to the round-a-bout at Gillard’s Service Station in December last year. That section is 1.8 kilometers or 1.118 miles of road.

The EC$18 million West Basseterre By-Pass Road is designed to link the western part of St. Kitts to the rest of the island, by-passing downtown Basseterre and allowing easier and safer road journeys, in less time and less traffic.