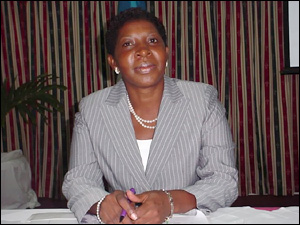 St. Kitts and Nevis is moving forward with preparations to implement sections of the OECS Electronic Government for Regional Integration Project (EGRIP) which will promote the efficiency, quality and transparency of public services through the delivery of regionally integrated e-Government applications.

EGRIP’s Project Manager Karlene Francis, recently made a three-day visit to St. Kitts and Nevis to meet with stakeholders and to assess the local e-Government environment. Director of Technology Christopher Herbert, told SKNIS that EGRIP perfectly complements the aims of the Federal Government.

“We have found that the structure or the operation of Government can be improved through the application of Information and Communication Technologies,” he stated. “So we have found the project, not just useful but it almost seems like a divine gift [in] that it aligns so well with what we deem as [necessary to show] the Government as more transparent, efficient and fiscally responsible.”

EGRIP is being implemented in Dominica, Grenada, St. Lucia and St. Vincent and the Grenadines via concessionary loans from the World Bank. St. Kitts and Nevis as well as Antigua and Barbuda were interested in the project but did not qualify for the special funding due to the high per capita income status. The Caribbean Development Bank (CDB) was approached and provided a grant for the two countries not covered by the World Bank, to participate in some subcomponents of the project.

“She was able to negotiate quite a bit and so there is no real cost to Government for participation,” he revealed, with Ms. Francis interjecting that a counterpart contribution of US $900,000.00 was made available for the six countries. “With much intervention from Ms. Francis it was agreed at the CDB level that the counterpart contribution would be in kind and not in cash.”

Ms. Francis hailed the leadership of the Federal Government, particularly the Minister of Technology the Honourable Glenn Phillip and Prime Minister the Right Honourable Dr. Denzil Douglas for the development of the Information Technology landscape. She explained that this bodes well for the project.

“Once we have developed the strategies, the policies, the framework to further enhance the environment then St. Kitts and Nevis will be in a better position to get additional funding,” she stressed.

“I worked at the Inter-American Development Bank and [based on my experience] donors like success,” Ms. Francis added. “So once you have produced a successful project then [the country] will be an attractive location in terms of getting additional funding and I think you already have the prerequisite for that so we are very happy to assist.”

Officials estimate that all the activities should be completed in the first quarter of 2013.