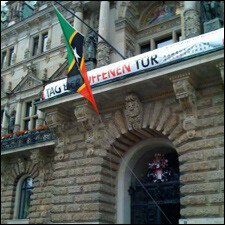 St. Kitts and Nevis has opened its Honorary Consul Office in Germany.

To mark the occasion, the Federation’s High Commissioner to the United Kingdom, His Excellency Dr. James Williams visited Hamburg to open the offices of the Honorary Consulate and meet with the Honorary Consul of St. Kitts and Nevis, Dr. Peter Ahner.

The consulate offices are located on the waterfront of the River Elbe.

The High Commissioner met Dr. Ahner’s wife and fellow lawyers and staff and held meetings with representatives of engineering companies to discuss the geothermal energy projects being developed in the Federation, with a view to expanding technical knowledge both within the Federation and of those companies involved in geothermal energy production.

An explanation of the workings of the organisation, which is an agency of the United Nations, was given and a tour of the building, including courtrooms was made.

While in Germany, Dr. Ahner hosted a riverboat tour of Hamburg harbour which allowed the extensive port and ship repair facilities of Hamburg to be seen close up.

The Airbus A380 aeroplane is being partly constructed in Hamburg and Dr. Williams and Dr. Ahner visited the factory and were shown sections of the aircraft under construction and the design and construction process was explained to them.

Mr. Smith visited the office of Classification Society Germanischer Lloyd with whom the Ship Registry has an agreement for surveying St. Kitts & Nevis ships.

A presentation about St. Kitts and Nevis and the ship registry was given to invited guests by Dr. Williams and Mr Smith. This presentation was held in the Hafen Club (Harbour Club) overlooking the River Elbe at the main ferry landing stage. This was at attended by about 30 guests, including those from shipping, law firms and banks.

The visit concluded with a reception for Dr. Williams at the Town Hall hosted by civic dignitaries of the civil administration of Hamburg.