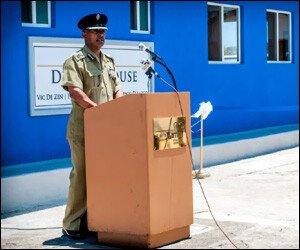 Statistics from the Royal St. Christopher and Nevis Police Force (RSCNPF) indicate that major crimes are down in the first quarter of 2015 when compared to the same period last year.

There were 634 reported cases in the major crime category in 2013. The figure decreased to 401 in 2014 and was recorded at 180 reported cases from January to April in 2015. However, there were increases recorded in the area of murder and shootings. Major crime covers incidences of murder, breaking, larceny, robbery, wounding, firearm and drug and malicious damage/arson.

Prime Minister and Minister of National Security Dr. the Honourable Timothy Harris congratulated the high command of the police force for their renewed spirit in designing and effecting anti-crime strategies. He expressed that murders and other crimes committed with firearms remain a concern and stressed that he expects improved results from law enforcement in this particular area.

A number of arrests have been made recently in several cases including robbery and homicide. Ballistic technology and forensic methods are being relied on to help strengthen the prosecutionâ‚¬â„¢s charges.

Assistant Commissioner of Police responsible for Crime, Ian Queeley reported that while the police will remain at the forefront in tackling antisocial elements, support is needed from all segments of society in this regard.