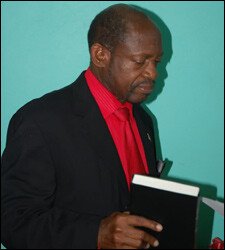 Prime Minister Hon. Dr. Denzil L. Douglas joined scores of supporters in Saddlers for the journey to the St. Paulï¿½s Police Station. As the motorcade passed through the constituency, scores of school children lined the streets outside their schools in Saddlers, St. Paul’s and Newton Ground, waving and greeting the St. Kitts and Nevis leader as they passed by.

Prime Minister Douglas, the Minister of Foreign Affairs, National Security, Immigration, Sustainable Development, Tourism, Sports and Culture, is seeking re-election as the Parliamentary Representative for St. Christopher 6 and was officially nominated at 11:00 A.M.

Joined by new comers, Dr. Norgen Wilson and Mr. Glenn “Ghost” Phillip and their supporters, the large motorcade travelled via Newton Ground to the Sandy Point Police, where Wilson, a Cuban-trained physician, seeking to represent St. Christopher 5 in the St. Kitts and Nevis National Assembly was nominated at 11:23 A.M.

From there the motorcade became larger as it passed through the villages of Half Way Tree, Conyers, Middle Island, Verchilds and Green Tree and into Old Road, where where Mr. Phillip, who replaces the retiring Hon. Rupert Herbert, was nominated at 12:09 P.M.

Similar activities took place in the other five constituencies.

So too was incumbent Minister of Housing, Agriculture and Fisheries, Hon. Cedric Liburd, who is seeking re-election in St. Christopher 8 (Ottley’s, Cayon-Conaree and St. Peters).

Nominated was the election’s only female candidate, former Speaker, Ms. Marcella Liburd, who is the new candidate in St. Christopher 2 (Central Basseterre).

As the large motorcade with Prime Minister Douglas and candidates Phillip and Wilson reached the Five Ways area, they were joined by Deputy Prime Minister Condor and Ms. Marcella Liburd and the cavalcade of cars and supporters passed through Irish Town before stopping at The Circus for a mini-meeting.

Prime Minister Douglas and the candidates made brief remarks.

The St. Kitts-Nevis Labour Party held 7 0f the 8 seats on St. Kitts in the outgoing National Assembly. The position People’s Action Movement (PAM), the other St. Kitts seat. Of the three seats in Nevis, the Concerned Citizens Movement (CCM) held two and the other was held by the Nevis Reformation Party (NRP).

The PAM is expected to contest the 8 seats on St. Kitts and the CCM and NRP the three seats on Nevis.