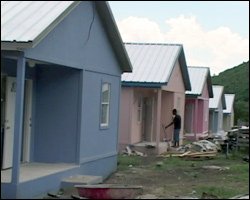 Minister of Agriculture Fisheries, Housing and Cooperatives, Honourable Cedric Liburd has reported that Housing has achieved much success over the 2008 to 2009 period.

He detailed that during the mentioned period, there were three Ministry of Housing projects and one National Housing Corporation (NHC) project.

One Ministry initiative was the National Emergency Management Agency (NEMA) Home Improvement Project.  To give some background, Minister Liburd explained that following Hurricane Georges in 1998 government constructed 471 one bedroom homes throughout St. Kitts.  The NEMA Home Improvement Project involved inviting the residents of those homes to apply for the construction of an additional room, if they so desired.

The Minister responsible for Housing informed that there were 160 applications for NEMA Home Improvement out of which 131 have been completed.  At the close of the 2009 construction period there were nine homes under construction with a remaining 20 to be built in 2010.  The Minister added that up to that point in time, the cost of the NEMA Home Improvement Project had been $5,817,273.95.

Minister Liburd also addressed the Ex-SSMC New Home Improvement Project.  Under this programme, former sugar workers were invited to apply for new homes and 246 expressed an interest.   He said that up to present, 84 of these houses were completed and 51 were under construction.  He said that the remaining homes will be constructed in 2010.

The Ex-SSMC Home Improvement was designed for former sugar workers who already had homes but were seeking to make renovations or upgrades.  The Housing Minister said there were 98 applications, of which 35 were completed.  Twelve are presently under construction and the remaining 51 will be completed next year.  Minister Liburd noted that at the end of 2009 the cost of the two EX-SSMC projects had amounted to $19,892,239.08 while the infrastructure cost is $8,207,660.92.

The NHC project is termed NH500 and is funded by the Social Security Board to the tune of $50 million.  Minister Liburd informed that 129 homes are completed and 131 were under construction.  He said that during the first quarter of 2010 the remaining 240 will begin construction.

Government is also partnering with private local firm Wilmor to provide an additional 65 houses for former sugar workers.  The construction technique of these homes involves using some prefabricated materials in the construction process.  This technology was first introduced in the Federation by the overseas-based company Vantage Inc. which is partnering with Wilmor.  The foundation for the homes is being laid by local firm England Construction.