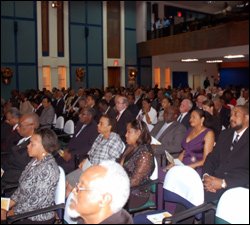 Representatives of several regional and international institutions and governments were among the large number of persons witnessing the recent signing of the new Treaty of Basseterre to establish the OECS Economic Union.

In his feature address, St. Kitts and Nevis Prime Minister and current Chairman of the Authority of the OECS Heads of Government, Hon. Dr. Denzil L. Douglas described the day as one of profound historical import for the Governments and peoples that constitute the OECS.