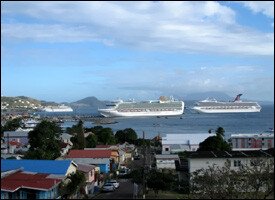 St. Kitts – Nevis registered a 10 percent increase in cruise ship passengers for the first half of this year.

Data from the Department of Finance and Statistics of the St. Christopher Air and Sea Ports Authority (SCASPA) also indicate a near 30 percent increase in cruise passengers in June this year compared to the same month in 2008.

Carnival Cruise Line accounted for 82,655 passengers between January and June with the Carnival Victory bringing 71,449 and the Carnival Miracle, 11,206 passengers from 19 and 10 calls respectively.

Two Holland America Line ships, the Maasdam brought 9,859 passengers on 8 visits and the Noordam, 1,911 visitors from one call.

The Cunard’s Queen Mary 2 brought 2,554 passengers on its lone visit to St. Kitts between January and June this year.

The increase in June is attributed to the out of season visit for the second consecutive year of a ship from the Carnival Cruise Line.  The Carnival Victory brought 12,962 passengers from four calls and one call from the Freewinds with 64 passengers in the month of June.