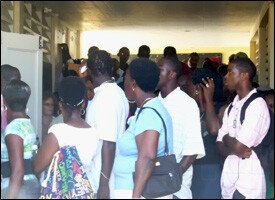 Over 560 employees who were laid off from the Four Seasons Resort Nevis received their severance payments today, Monday, August 10th 2009.  These workers were laid off on February 22nd, 2009.

By law, the process of severance payment could not officially start until the workers had been out of work for a period of 12 weeks; that is around May 22nd, 2009.

Specifically, the general public must be reminded that in January of this year, the Premier of Nevis, Hon. Joseph Parry warned then Four Seasons Resort workers that it was important that they know that “lay-offs” were imminent.  It is public knowledge that the highly irresponsible opposition forces criticized this wise and responsible move.

Recognizing the importance of the Luxurious Four Seasons Resort on the island, Premier Parry met with the management team, Bankers, owners of the hotel and villa owners in New York. These meetings were aimed towards ensuring that rehabilitation work on the hotel commenced quickly so that the hotel could be reopened at the earliest possible date and workers given the opportunity to resume employment.

The government is very saddened and disappointed that the irresponsible political opposition here in Nevis is seeking to gain political mileage by claiming credit for the Four Seasons workers receiving their severance payments in such a quick time.

The opposition was never involved in the process and is due no credit for the successful completion of the process.  In fact when workers were faced with a similar fate in 1999, it is a matter of record that some workers took months longer to receive their severance payments.

With regards to the Marriott workers and the assertion that those workers received their severance claim before our Four Seasons workers it must be made clear that the Marriott workers were terminated on April 9th, so the process of their severance payment started with immediate effect, whereas the process for the Four Seasons workers started after the 12 week period as stipulated by law.

The government has acted responsibly, honestly, openly and decently with the full interest of the workers in mind.  The office of the Premier has been inundated with telephone calls, emails, text messages from workers who have been overwhelmed by the level of representation received from this government especially when compared to the weak representation given by the previous administration in 1999.

The Office of the Premier wishes to thank the Four Seasons Resort workers for their patience, understanding and maturity during the past several months; and wish them well for the future.