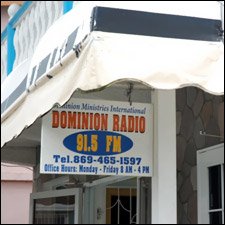 The ruling St. Kitts – Nevis Labour Party’s policy of nurturing a free press and freedom of expression is being hailed as one of the cornerstones of good governance by the lone female candidate in the upcoming general elections.

Former Speaker of the National Assembly, Ms. Marcella Liburd is also scoffing at accusations by the opposition that Prime Minister Hon. Dr. Denzil L. Douglas is a dictator. She highlighted blatant examples of PAM’s manipulation of the media, press censorship and suppression of free speech during its 15 years in office.

“The facts are that under the leadership of Dr. Douglas and in his capacity as Prime Minster, St. Kitts and Nevis is experiencing its freest press. You think about it? The freest time the Press has ever enjoyed is under this St. Kitts-Nevis labour Government of Prime Minister Dr. Douglas,” Ms. Liburd reiterated.

She pointed to the significant increase in the number of radio stations, newspapers and internet-based websites granted licences since Denzil Douglas Administration took office in July 1995.

“Everyday single day, several persons can be heard criticising and some even abusing the government and the Prime Minister and nobody doing anything. They are free to express their views. It is freedom of the Press,” stressed Ms. Liburd, quickly asking: “What kind of dictatorship will allow that?”

Ms. Liburd also made references to manipulation of the media and press censorship during the tenure of the former government in that whenever the Prime Minister the Right Excellent Sir Kennedy Simmonds addressed the nation, it was mandatory that all Cable TV channels carried his speech simultaneously.

“You could not watch your favourite channel. What would you call that?” she asked, pointing out that unlike the current situation where all calypsonians get airplay on ZIZ, it was not so during PAM’s 15 years in office.

“These days you listen to Calypso shows and every song is played. Before 1995, PAM banned any and all calypsos that criticised the (PAM) Government. Any calypso that was critical of the PAM Government was banned from playing on the airwaves prior to 1995. Not now. Calypsonians are free to sing and are free to criticise the government if they want. I really donot know what type of dictatorship they charge. They are just trying to deceive you, they are trying to fool you and you must not be fooled,” said Liburd, adding: “Facts are facts and facts cannot be changed.”

She referred to the recent suppression of the facts by an activist of the People’s Action Movement (PAM) who co-hosts the Wednesday edition of Voices.

“On Wednesday ““ June 10th ““ one of the famous doctors who is on radio on Voices every Wednesday trying to say he is independent ““ but everybody knows he is a PAM activist, ““ ruled that anybody who called in and talk about June 10th 1967, will be cut off. What is that? Is that freedom? Is that free expression? Then they have the gall to level unfounded and misleading charges that Prime Minister Douglas is a dictator,” said Liburd, a former National netballer, umpire and educator.