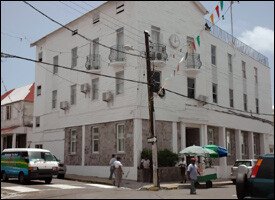 In a 15-minute national broadcast Wednesday night, Prime Minister Douglas said his government continues to function at the high level of assessment, planning, and activity that there has always been.

“There has been the drafting of laws”¦and the signing of agreements.  There has been our presence at historic regional and international fora, and the beginning and completion of projects.  Your Government continues to assiduously address itself to matters pertaining to the management of the economy; the provision of vitally needed social services; and the protection of the nation’s interests,” said Prime Minister Douglas, adding: “In other words, the Government that you elected has continued to govern as we have ““ with energy and tenacity ““ met the myriad and consequential responsibilities associated with the running, the protecting, and the shaping of a nation.”

In his broadcast Prime Minister Douglas said on the other track are the cases that have been brought before the Court by members of an opposing political party, “supposedly as a means of signaling displeasure with the boundaries that were established by proclamation on July 9, 2009, with both the National Assembly and the Governor-General, respectively, properly and thoroughly assuming their Constitutionally-mandated roles.”

In reviewing the events of the past few months, Dr. Douglas pointed out that the 1983 St. Kitts and Nevis Constitution establishes and asserts the concept of separation of powers.

“And so, of necessity, the deliberations of the Court have had to proceed on a track that is completely separate and distinct from the governance-related responsibilities of my Government,” said Prime Minister Douglas.

He told the Nation, that with his special responsibilities toward this country, he had hoped that by this time, the Nation would have received a ruling from the Court – at the very least in order for the people of St. Kitts and Nevis to have greater clarity vis-Ã -vis the thinking and analysis of the Court;  and secondly, because this ruling will have some bearing on how, as Prime Minister, and with strict adherence to the Constitution, “I assess the various timing scenarios regarding  the people of St. Kitts & Nevis exercising their sacred and most important right to vote.”

Dr. Douglas told the Nation it was very important that those seeking political power, whether in Saint Kitts and Nevis or elsewhere,  respect and adhere to the time-proven means of achieving such power.

“That is, they must be willing to put in the long hours, to make the extraordinary effort, and to invest the tremendous energy that is required in order to win the trust and support of the electorate.  While the Courts are a revered and essential component of our democracy, and while it speaks to the strength of our democracy that every national, citizen, and resident has inviolable access to our Court system, our Courts should, nonetheless, be used as a means of settling legitimate disputes between dissenting parties,” said Prime Minister Douglas.