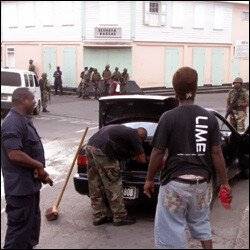 On Wednesday October 14th a joint patrol comprising of officers of the SSU, Drug Squad and members of the St.Kitts-Nevis Defence Force conducted a walkthrough in the Mc Knight Community. During the exercise three search warrants were executed on premises at Fort Thomas Road and Fiennes Ave for illegal drugs arms and ammunition. Nothing illegal was found. Fourteen persons were stopped and searched; one vehicle and ten abandoned houses and empty lots were also searched. Small quantities of cured marijuana were found, but no one was made accountable.

Officers from the Old Road, Sandy Point, St. Pauls, Tabernacle and Cayon Police districts also carried out similar operations in their respective communities. Search warrants were executed on premises in Sandy Point, St.Pauls and Godwin’s for stolen goods illegal drugs arms and ammunition. A number of electronic and other household items suspected to be stolen were seized from these premises and 9 persons were arrested on suspicion larceny. Shorna Que Pemberton of Downing Street, Sandy Point was arrested and charged for obstructing the police in the execution of their duty, while three other persons were arrested at Fig Tree for disorderly conduct by fighting.

One hundred and twenty-eight vehicles were stopped and checked for traffic violations, while twenty persons were stopped and searched on suspicion of having illegal drugs arms and ammunition. Nothing illegal was found on these persons. One person, for whom outstanding maintenance warrants were in existence, was arrested after he was not able to satisfy the warrants.

At about 2:50 a.m on October 15th 2009, the police responded to an alarm activation at the St.Kitts Brush Company at the Paul Southwell Industrial Park. The officers met two 16 year old juveniles in the building and in the process of apprehending them one of the juveniles sustained a gunshot injury, while the other made his escape through a glass door. The injured intruded was taken to the JNF Hospital where he was treated and detained in stable condition. The escaped juvenile was later arrested and is currently in Police custody. Investigations are ongoing.

Martin will be remanded at HM Prison shortly.