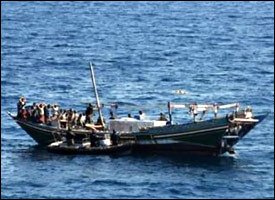 A cargo ship flying the St. Kitts and Nevis flag has been hijacked by pirates near the coast of  Somali, the Ministry of Foreign Affairs in Egypt said Thursday.

An AFP report from Cairo, the Egyptian capital said the Somali pirates hijacked the cargo ship with a crew of 28 Egyptians.

About 15 pirates, some of them heavily-armed, attacked the Blue Star, which carried 6,000 tonnes of fertiliser, near Bab al-Mandab as it was headed east, said Egyptian foreign ministry official Ahmed Rizq.

“The crew are hostages…there are efforts underway to conduct the necessary talks to free the ship,” Rizq said in the statement.

The Blue Star was flying the flag of Saint Kitts and Nevis, Rizq said. He had initially identified it as Egyptian.

More than 100 attacks occurred in the pirate-infested waters off the coast of the lawless Horn of Africa country in 2008 alone.

Pirates had captured an Egyptian ship with a crew of 25 in September, holding them for almost a month before setting them free. Egypt said it did not pay a ransom for the crew and ship.

The pirates have been undeterred by the presence of foreign navies patrolling in the Gulf of Aden and the Indian Ocean in a bid to secure one of the world’s busiest shipping routes.