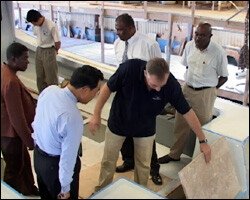 The soon-to-be completion of a 40-foot fishing boat will signal the fulfillment of government’s commitment to fortify the fishing industry in an effort to increase diversification.

This sentiment was expressed by Minister responsible for Fisheries Honourable Cedric Liburd during his visit to the Indigo Yachts boatyard January 21.  Minister Liburd outlined the process that led to the construction of the vessel that commenced with discussions with the government of the Government of the Republic of China (Taiwan).  The result was funding to the tune of over US$230,000.  Minister Liburd said he was please with the work done so far and complemented Indigo Yachts’ President and Chief Executive Officer David Ridsdale-saw and the staff for their work.  He further noted that he was particularly looking forward to the boat’s completion, as it would assist in the expansion of the fishing industry and reduce the Federation’s large importation of fish.

Minister Liburd thanked Taiwan’s resident ambassador His Excellency Rong-Chuan Wu, as well as the government and people of the Republic of China (Taiwan), for assisting the Federation in its diversification work.  Along the same vein, Taiwan’s Ambassador said he was pleased with the work and happy that it would be used for the purposes of training local fishermen.

He highlighted the communication between the Department of Fisheries and the fishermen noting that this enabled equipment choice to be as practical as possible, ensuring its usefulness.

President and CEO Ridsdale-saw of Indigo Yachts, which had been contracted to construct the boat, revealed that all of the interior had been painted, doors installed, engines, propeller shafts and propellors had been put in place.  He said that once the paintwork was finished, the systems would be installed.  The proposed completion date was the end of February.  The Indigo Yachts CEO said that the boat would be on display once it was completed.

Director of Fisheries Mr. Joseph Simmonds said that the construction of such a commercial fishing boat had been a dream of the Fisheries for a long time but previously, the department had been unable to secure the funding.  As such, the completion of the vessel was greatly anticipated.  He said that in discussion with the fishermen, one of their desires always had been to do some exploratory fishing in addition to the regular catching of fish.