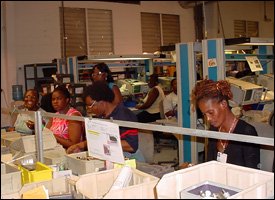 The Federal Cabinet of the Government of St. Kitts and Nevis agreed at Monday’s meeting to form a committee to investigate the current state of the job market in the twin-island Federation.

Minister of State for Information, Sen. the Hon. Nigel Carty said the committee will engage manufacturing employers on the industrial estate to glean as much information about the employment situation as possible, with a view to alleviating the concerns of the workers employed there.

“Government is of the view that the industrial estate workers represent a critical segment of the working population and that it should explore all means to provide assistance and support in this time of global economic setback,” he said.

The Committee formed consists of top public officials from the Ministry of Labour, the Ministry of Industry and Commerce, and the Ministry of Tourism, and it is expected to report to the Cabinet on a weekly basis so that government would have the opportunity to respond within the shortest possible timeframe to any adverse development.

The decision followed a report from Deputy Prime Minister and Minister of Labour, the Hon. Sam Condor, who pointed out that the US economy, was experiencing a severe loss of jobs, with the previous month recording the highest job loss rate in a quarter century.

He also informed the Cabinet that he had been in contact with employers on the industrial estate who had advised that they were cutting some staff positions.

“One other employer had indicated that he was expanding his business because closure of plants in other parts of the world had resulted in increased manufacturing business for his plant,” reported Minister Condor.

Monday’s Cabinet meeting focused extensively on the World Economic Crisis and the possible ramifications this may have on the local economy. Minister of Finance, Dr. the Hon. Timothy Harris, reminded his colleagues that the world’s largest economies were in recession and that even the fastest growing economies in Asia were expecting significant reductions in their economic growth rates.