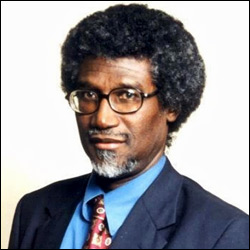 Governor of the St. Kitts-based Eastern Caribbean Central Bank (ECCB) Sir K. Dwight Venner says crime is having a negative impact on economic activity and growth in the region.

Sir Dwight, who was the featured speaker at the opening of the two-day inter-sessionary meeting of the Association of Caribbean Commissioners of Police (ACCP) in Barbados on Wednesday, said a study showed that the cost of fighting crime in Jamaica in 2001 was $12.4 billion or 3.7 percent of gross domestic product. He also cited a 2009 study, which took a “comprehensive look” at the impact of crime in that country.

“It reveals the evolution of a system of criminality, which has protruded in every facet of society. . . . The maturation of this system is frightening as it poses a significant challenge in the state system, which we saw earlier as the government sought to extradite a gang leader from the island,” he said.

He said the focus for Caribbean policy makers over the last two decades had been on the increasing external vulnerability of the economies and this was demonstrated by the transition from agriculture economies to tourism, which had increased vulnerability.

“The major problem arises, however, because of the impact of crime on . . . an industry like tourism. Just two weeks ago, cruise ships pulled out of St. Kitts because of the robbery of a bus load of tourists at one of the premier historical sites,” he said, adding that quick police work with the assistance of the public led to the apprehension of the perpetrators.

The financial sector also held areas for criminal activity by way of money laundering and terrorist financing, which had the countries under “constant scrutiny”, he said.

Sir Dwight added that intimidation on criminal gangs by the workers in these sectors also impacted on production and productivity.

In view of those challenges, he said “significant” restructuring of the domestic economies was necessary at the national and regional levels.

The ECCB Governor said that justice, law and order must be seen as the logical progression of that and more emphasis needed to be placed on the police by way of education and increasing capacities.

He reiterated a call made on previous occasions for a single force to cover the Organisation of Eastern Caribbean States that could serve as a complement to the bank.

He argued that it made economic sense, given that funds for police and prisons were necessary for law enforcement.