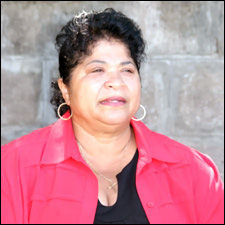 CEO of the Caribbean Foundation for Children Mrs. Evelyn Henville

60 Nevisians and 70 Kittitians will on Monday, December 6th at the Occasions Entertainment Complex on Nevis and the Cotton-Thomas Comprehensive School on St. Kitts, receive early Christmas presents in the form of free hearing aids from the Starkey Hearing Foundation.

The initiative is the brainchild of daughter of the soil, Mrs. Evelyn Henville who is the Chief Executive Officer [CEO] of the Caribbean Foundation for Children.

Mrs. Henville, who first learnt of the work of the Starkey Hearing Foundation back in 2004, organised and executed screenings for hearing loss during the first quarter of this year with the federation’s students being surveyed in January and other persons in March and April via a media blitz which encouraged them to visit designated health centres.

In a recent interview with Mrs. Henville, she said plans were in place for next Monday’s distribution of the free hearing aids and added that while the hearing aid mission will be of no actual cost to the Government of St. Kitts-Nevis or the families of the recipients, she was pleased with the support of the general public.

The government, she said, has agreed to waive the landing and other charges for the team of technicians who will arrive on St. Kitts in their private jet and journey to Nevis on the Sea Bridge.

“We are very pleased and happy. We have waited long and this would be a wonderful Christmas gift for our 130 citizens: children, middle-aged and senior citizens. We have a number of senior citizens from the Cardin Home and from the Flamboyant Home who will benefit from this fabulous event,” she said.

With a bright smile on her face, CEO Henville expressed how delighted she felt that her fellow countrymen and women would, in a matter of days, be able to benefit from the kind gesture of the Starkey Hearing Foundation that is based in Minnesota.

“These hearing aids are on the commercial market in the U.S. starting anywhere from US$2500 per person; that does not include the cost of the specialist, or transportation, examination or anything whatsoever so you can expect that at the end of the day these hearing aids can cost anywhere around US$3,000 and that is times 130 persons and each person gets two,” Mrs. Henville explained.

While in the Caribbean, the Starkey Hearing Foundation will also be carrying out their hearing mission in Antigua and the Dominican Republic.

Mrs. Henville’s Caribbean Foundation for Children was started after her son; Jonathan was diagnosed with cancer at the age of three.

“It was a family experience that caused our family to relocate to the United States for the chemotherapy,” she said.

While the Caribbean Foundation for Children “branches out when it sees a good project,” its basic purpose is to help children suffering from illnesses that require medical attention beyond the shores of St. Kitts-Nevis.

“Our main purpose is to serve the child: anything pertaining to the child in terms of his/her health, education needs, community needs. We want [however] to stay focused on the child’s needs in terms of health and education [therefore], we are looking at any child on Nevis and St. Kitts who may have a need for a second medical opinion. That was our biggest need when my son was diagnosed with cancer,” she explained.

The Caribbean Foundation for Children has focused primarily on the three schools that Mrs. Henville said had an impact on her family’s upbringing.

“We sponsor 13 children each year with scholarships from the Violet O. Jeffers Nicholls, Molineaux and Estridge Primary Schools,” she said.

As part of their scholarships, students receive items such as school uniforms, books and shoes for one full academic year while the schools have received new computers, televisions, video home system [VHS] machines and teaching supplies.