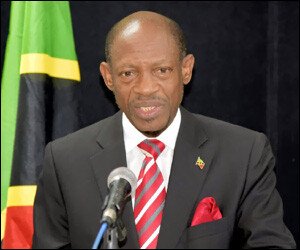 The strides in the several sectors of the St. Kitts and Nevis economy were highlighted during this month’s press conference by Prime Minister the Rt. Hon. Dr. Denzil L. Douglas.

“Today, our clear advances in agriculture, manufacturing, tourism, construction, energy and other sectors attest to the effectiveness of our diversification thrust.  Agricultural production up, and the Federation now exports to St. Maarten, Antigua, Anguilla, St. Croix and other regional markets.  The value of our manufactured exports to the United States continue to exceed those of all other Eastern Caribbean countries ““ including Barbados ““ combined, and this Government’s collaboration with the private sector will produce, as a result of our agreed upon National Manufacturing Strategy, some 150 new manufacturing jobs this year, plus an additional 500 by 2020, with the shared public/private emphasis being on environmentally sustainable enterprises,” said Dr. Douglas.

He pointed out that tourism’s role in the diversification thrust is evident in the Federation’s extraordinarily strong standing within the international travel market, with the New York Times, just last week for example, naming St. Kitts and Nevis as one of the 52 places globally that must be seen in 2015, and with the attendant personal income, government revenue, and corporate profits continuing to accrue to the Federation.

“Green energy is the means via which this Government will end St. Kitts and Nevis’ traditional reliance on fossil fuels to power the country’s development.  The solar farm at the Robert Llewellyn International Airport already powers our air and seaports.  It also sends power back to the national grid.  Preparation for an additional 500 kilowatt solar farm got underway this week in East Basseterre, with a third planned for the rural area.  These two farms alone will reduce the country’s fuel imports by some 80,000 gallons per year and are important indications of my Government’s commitment to transforming the energy profile of this country,” said Prime Minister Douglas.