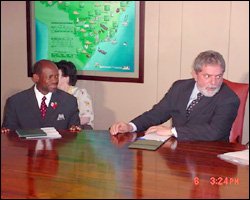 The delegation, which left on Sunday, joined several Caribbean leaders for the trip to Brazil. The Summit opened in Brasilia on Monday and is being attended by the leaders of Antigua and Barbuda, Dominica, Jamaica, St. Kitts and Nevis, Grenada, Haiti, Suriname, St. Vincent and the Grenadines, Guyana and St. Lucia.

Other members of the 15-member CARICOM grouping are being represented by their foreign affairs minister with the exception of Trinidad and Tobago whose delegation is headed by its Ambassador to Brazil.

According to the Guyana-based CARICOM Secretariat, the summit is “expected to identify avenues for the development of cooperation between CARICOM and Brazil in many sectors; political, commercial, economic, cultural, consular, and educational.

“The Heads of Government based on preliminary consultations have shown a commitment to enhance cooperation and collaboration and a quest for mechanisms to monitor that cooperation and strengthen their historical and cultural bonds,” the statement added.

It said that several bilateral meetings between CARICOM and Brazil preceded the summit and made reference to the 2005 Inter-Sessional Meeting of CARICOM Heads of Government in Suriname that was addressed by Brazilian President His Excellency Luis Ignacio Lula da Silva.

The meeting in Brasilia is also be attended by CARICOM Secretary-General His Excellency Edwin Carrington who will lead a five-member delegation.