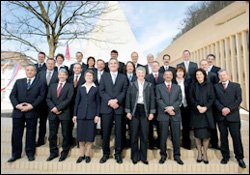 The Tax Information Exchange Agreement (TIEA) signed between the Governments of St. Kitts and Nevis and Liechtenstein has been ratified by the Liechtenstein parliament.

By a large majority, the Liechtenstein Parliament approved 11 tax agreements submitted by the government and which are compliant with the Organization for Economic Cooperation and Development’s (OECD’s) standards on tax information exchange.

Ratified on April 22, the bilateral tax agreements are those with Germany, the United Kingdom, France, the Netherlands, Ireland, Belgium, Monaco, Andorra, St Vincent and the Grenadines, St Kitts and Nevis, and Antigua and Barbuda.

According to the Liechtenstein government, the agreements are due to enter into force once the domestic ratification procedures in the respective partner countries are complete.

All agreements are based on the OECD Model Convention and provide for information exchange in suspected cases of tax evasion on the basis of a justified individual request. Upon entering into force, the agreements signed last year with the various partner countries will apply to tax years 2010 and beyond. The government points out, however, that the agreements exclude administrative assistance based on stolen client data pursuant to an “ordre public” clause.

Commenting on the latest development, Liechtenstein’s Prime Minister Klaus TschÃ¼tscher said: “The decision by parliament underscores the political consensus in our country with regard to rapid implementation of our international commitments.”

“The conclusion of these agreements, especially with a series of EU member states, constitutes an important step toward more legal certainty in the cross-border persecution of tax evasion in Europe.”

With its Declaration of March 12, 2009, Liechtenstein committed itself to the global standards on transparency and information exchange in tax matters defined by the OECD. Since then, Liechtenstein has signed 16 such agreements, and on March 30, 2010, the government approved the draft laws intended to provide a legal basis for the agreements now ratified by parliament.