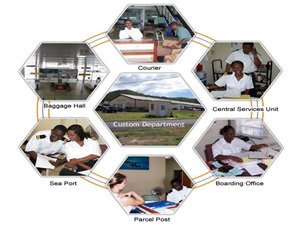 The Customs and Excise Department has expressed thanks to St. Kitts and Nevis Prime Minister Hon. Dr. Denzil L. Douglas for the influential role he has played in the Federal Cabinet’s approval of the improved pay package for Customs Officers.

“It was indeed a pleasure to have had the honour of working with one as committed as yourself. The staff has been energized as this has been long promised,” said Acting Comptroller of Customs, Mr. Rodney Harris.

Mr. Harris in a letter to Prime Minister Douglas gave the Federal Cabinet the assurance that the Customs Department will “continue to strive for excellence and set new standards so that others may follow our example.”

“Once again kindly accept our heartfelt gratitude for your efforts in assisting us as a Department to have our concerns through our proposal addressed in such an admirable manner,” said the customs chief.