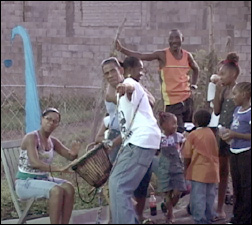 Residents of Lime Kiln were the first in the Federation to experience St. Kitts You, N, Culture or SYNC.

Organised by the Department of Culture, SYNC is a spontaneous cultural event designed to bring communities together using the performing arts.  Residents of Lime Kiln community were invited to SYNC by ringing of a bell by Sylvester Dore who was the Master of Ceremonies (MC) for the evening.

Director of Culture Creighton Pencheon encouraged Lime Kiln residents to leave their homes and come into the streets to experience SYNC.  He told the audience of the days gone by when evenings were spent playing ring games, story telling, singing and dancing.  The issue of the impact of negative elements on the community also came up.

Director Pencheon described culture as a vehicle to bring the community together and he encouraged Lime Kiln residents to use SYNC as a new beginning and a means of organizing a community event.

Throughout the evening MC Dore used catchy phrases to invite residents to come to the spectacle.  Accompanied by the National Drum Corps, a member of the Okolo Tegremantine Arts Theatre blessed the area in the African tradition by dancing the Cumina and spewing out water on the ground.  The evening’s performances also included local poets, the singing of songs about the Lime Kiln community and cultural music and sports.

Marlene Philips Research and Documentation Specialist in the Department of Culture, informed the St. Kitts and Nevis Information Service that SYNC was welcomed with open arms by the Lime Kiln community.  She informed that the next SYNC takes place tomorrow, Thursday, October 21 on Cuba Street, Carifesta Village, St. Peter’s.  She noted it is a collaborative effort between her department and the St. Kitts-based Embassy of Cuba, which is celebrating Cuban Independence.