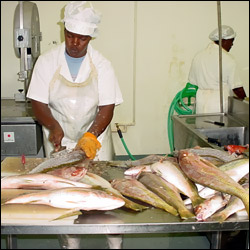 St. Kitts and Nevis says that the long-term solution to food security and increasing food prices in the twin-island federation as a result of global food price crisis, is not price control or even reduced consumption taxes.

“If we are to attain food security and to protect ourselves from escalating food prices in international markets, we must produce and consume more local agricultural products. In fact, I contend that if my Government had not already taken action to increase food production the impact on our Federation of the international food crisis would have been even more severe,” said St. Kitts and Nevis Prime Minister Dr. Denzil L. Douglas.

He said that the global food price crisis that is a major source of worry for policy makers all over the world demonstrates quite clearly that the allocation of resources to the development of the agricultural sector must continue.

“Indeed the Millennium Development Goals established by the International Community for the substantial reduction of poverty in developing countries by 2015 are being placed in jeopardy by the dramatic increases in food prices in recent years,” said Prime Minister Douglas.

He said that the global statistics in respect of food prices are frightening and recalled several measures taken by his Labour Administration to deal with the crisis.

“My Government acted speedily to offer protection to our people from the ravages of food price increases. Indeed, we were among the first countries in the Caribbean Community to implement a package of relief to our consumers. In particular, in keeping with the budget initiatives that I announced in December of last year, we placed a cap on the electricity fuel surcharge which, at the recent record levels of energy prices, has reduced by surcharge paid by our households by more than 50%. We also substantially reduced the duty and consumption taxes payable on food barrels imported by our people and we placed a limit on the margins that business could charge in respect of some 29 items that constitute a major portion of the typical basket of goods purchased by low-income families,” said Prime Minister Douglas.

He said his Government subsequently went further and completely removed the consumption taxes from 10 items that exert strong influence on the cost of living of low-income households in particular.

“Comrades, there can be no doubt that even in these very difficult and challenging times,  our track record as a caring government that protects the poor and vulnerable, remains unblemished and nonpareil,” said the St. Kitts and Nevis leader.

He noted that in his last budget address, he reported that some 80 acres of land were prepared and allocated to 55 farmers in the Belmont area and they have been very successful in producing a range of crops including peanut, sweet potato, cassava, dasheen and various vegetables. There is also substantial increases in the production of cabbages, white potato, carrots, and onions as well as beef, mutton and goat meat.

“We have been allocating more and more lands to our farmers with a view to raising production even further. In particular, following the allocation of some 100 acres of land to farmers in Estridge, Mansion, Phillips’s and Old Road, we have allocated another 80 acres to 44 farmers in the Fahie’s agricultural belt to bring the total acreage of land distributed to farmers in this area to 224 acres. In addition, our National Physical Development Plan provides for the allocation of another 1000 acres of land to farmers in the Whitegate Development area,” the Prime Minister said.

“We understand that it is also necessary for our people to consume more local food in preference to imported food. We therefore intend to introduce a major public relations and education initiative aimed at promoting greater use of locally produced food by our people and our many visitors from overseas,” said Dr. Douglas.

He asserted that his Government “is an action Government” and was doing everything possible to promote food security by reducing a reliance on imported food and by giving its people greater access to fresher and tastier food at lower prices in St. Kitts and Nevis.

Dr. Douglas said Government is conscious that while its plans for food security take root and blossom over a period of time, the people must eat in the meantime.

“We therefore increased the wages of public servants by 5% on an interim basis and we intend to give careful consideration the relevant technical studies and to expeditiously approve the additional increases that the public servants and other Government employees so richly deserve. Moreover, the minimum wage in real terms has been significantly eroded because of increasing food prices. We therefore intend to significantly increase the minimum wage, after appropriate tri-partite discussions, with a view to ensuring that no person in St. Kitts and Nevis is left behind in our great march forward to enhanced growth and prosperity that they deserve,” said Prime Minister Douglas.

He said his Government is particular concerned about the many workers on the industrial estates who provide extended periods of service to their employers then find themselves having to walk off the job without even a few cents in their pockets.

“We will therefore introduce legislation to provide a gratuity to such workers when they retire after serving for more than 10 years, 20, 30 years. In other words, we have taken care of Government workers who were previously labelled “˜non-established’ by making provisions for them to enjoy retirement benefits and we intend, in a similar manner, to take care of our workers on the industrial estates,” said Dr. Douglas.

“My Government is a Labour Government that is rooted in the working class of this country. It is therefore our aim and mandate to ensure that every worker in this country provides quality service for a just and fair reward, and go about their business with a sense of pride and dignity,” said the St. Kitts and Nevis leader.