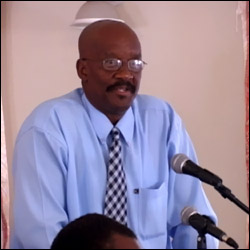 Permanent Secretary in the Ministry of Agriculture Lands Housing Cooperatives and Fisheries on Nevis Mr. Pearlivan Wilkin, said that the Nevis Island Administration (NIA) was serious about fisheries and the role it played in the island’s food security.

He made the comment during a ceremony hosted by the Fisheries Department, to mark the start of a three-day Socio-Economic Monitoring (SocMon) workshop at the Red Cross conference room on May 20, 2008.

The workshop was held for fisheries management stakeholders to learn how to develop and implement socio economic monitoring programmes for strategically selected sites through the use of SocMon Caribbean methods.

Mr. Wilkin said the NIA was mindful of the many health benefits that could be derived from the consumption of fish, and had invested in projects to assist fishers on the island.

“Consequently the government has recently expanded some $75,000 on the rehabilitation of the Fisheries Complex “¦ Additionally the NIA is hoping to review its Fiscal Incentives Policy for fishers and to upgrade the landing sites around the island.

“The NIA has just completed a project proposal for a new fisheries complex in Charlestown. This project which was drafted by Mrs. Althea Arthurton and Mr. Arthur Anslyn, will be funded by the Japanese,” he said.

Mr. Wilkin also pointed to the increase in local, regional and international training of fishers in an attempt to take them to the next level and said the workshop would contribute towards building capacity among all fishers, stakeholders namely fisheries officers, landing site personnel, planners, coastal managers, enforcement agencies and local consultants.

He thanked the University of the West Indies and the National Oceanic Atmospheric Association for the role they played in the organisation and funding of the workshop and commended the facilitators Dr. Mc Conney and his team.

The Permanent Secretary also expressed gratitude to Senior Fisheries Officer Mr. Audra Barrett who he said saw the need to provide the Ministry with information which he had brought from Antigua in 2007 and Mrs. Laurel Arthurton of the Management Information Unit and Mr. Pemberton for their assistance.

It was held in Barbados and Dominica prior to Nevis and will be held in Grenada and St. Vincent and the Grenadines.