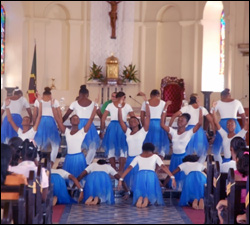 The Children’s Dance Threatre is celebrating its 21st Anniversary.

Threatre members attended Mass at the Co-Cathedral of the Immaculate Conception on Sunday 10th October and participated in the Service.

“Twenty-one years have gone since the Children’s Dance Theatre (CDT) started offering classes in the various genres of dance to the youngsters of St. Kitts Nevis.   The long awaited 21st anniversary of the dance group was met with much anticipation by both past and present staff and dancers,” said co-founder Ms. Lelia “Julie” Martin.

She said divine worship at the Co Cathedral Immaculate Conception signaled the commencement of celebrations marking this significant milestone.

“Dancers presently enrolled along with their dance teachers attended a special 10-10-10 celebration service to thank the Almighty for his blessings over the past twenty one years in addition to seeking his guidance as the club forges ahead,” said Ms. Martin.

Dancers who are practicing Catholics were actively involved in the service which also featured a very moving sermon from Father Jan.

CDT’s anniversary church service came to a great climax with a moving dance performed by the senior division, Rockets.  Former staff members and dancers along with friends and well wishers shared in this joyful occasion.

CDT was formed in October 1989 by Stuart Morton and Julie Martin.  The first dance class was held at Flex Fitness Center when over thirty dancers including four boys turned up to be taught dance in a formal setting.  At present, there are sixty dancers and a seven member staff.