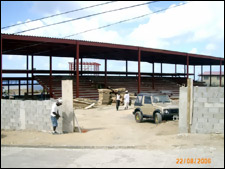 The US$7 million investment by Caribbean Cinemas Management of Puerto Rico, Inc. is a show of confidence in the economic climate as the government continues to transform the national economy of the twin-island Federation of St. Kitts and Nevis.

So says Prime Minister and Minister of Finance, Tourism and Sustainable Development, Hon. Dr. Denzil l. Douglas, who pointed out that Foreign Direct Investment in St. Kitts and Nevis over the years, has “outstripped and surpassed the rest of the Caribbean islands, especially in the Eastern Caribbean.”

“This is part of the overall thrust for the development of St. Kitts and Nevis, especially providing appropriate modern entertainment facilities for our people,” said Prime Minister Douglas as he toured the construction site at Buckley’s Estate von the outskirts of Basseterre, the capital.

Recalling the closure of the sugar industry in 2005 to concentrate on tourism, hospitality and financial services, Prime Minister Douglas said a modern theatre adds to the growing and expanded services sector that are being provided to residents and visitors alike.

“This is a show of confidence in the economic climate of the country and what the government is seeking to do in the transformation of the national economy,” said Prime Minister Douglas, who pointed out that St. Kitts and Nevis “has been extremely fortunate in attracting a high level of Foreign Direct Investment over the last few years, which has been able to fuel the continued development and economic growth in the country.”

He said the location of Caribbean Cinemas uplifts the immediate Buckley’s Estate area.

“Imagine what that does to the local community. The local people will be provided opportunities to find employment in this facility. The general uplifting of the area will have positive effects for St. Kitts and Nevis,” said Prime Minister Douglas, who expressed thanks to the investors for their “show of confidence in the people, in the government and the country in partnering for the mutual benefit of all.”

Dr. Douglas singled out Mr. Sherwin White, local partner and director, for his persistence in promoting the local entrepreneurial spirit that all young people in St. Kitts and Nevis should emulate.

“He has the right attitude, the right mix and I believe he can be a role model for our young investors in St. Kitts and Nevis,” said Dr. Douglas. White said some 35 local persons have been employed during the construction phase of the project, which should be completed in August.

Caribbean Cinemas President, Mr. Robert Carrady, who bought the land from private property owners, said the project when completed will house seven individual theatres with a total of 1200 seats along with a 1,000 square foot game room and will employ some 50 persons.

He said there will be additional employment for the six concession areas which will include a coffee shop, an ice cream parlour and a pizza place.

The cinema will cater for two showings daily Monday thru Friday and four shows on Saturday and Sundays.

“We will always have at least one programme for families and children,” said Carrady.