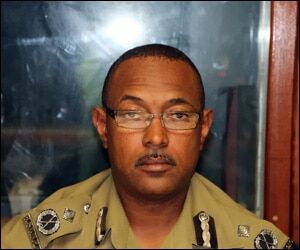 Former Assistant Commissioner with Responsibility for Crime, Mr. Ian Queeley, is the new Commissioner of Police for St. Kitts – Nevis.

In a radio and television national address on February 9, 2016, Prime Minister and Minister of National Security, Dr. the Honourable Timothy Harris, announced the appointment of a new Police High Command, with Mr. Queeley as the top cop.

“He has overall accountability for all Policing matters. The buck stops with him and he must hold all subordinates accountable for performance,” Prime Minister Harris said.

Dr. Harris said that Mr. Queeley has over 30 years as a police officer, half of which he has served at strategic management and executive levels.

“He has had a well-rounded career having spent 13 years working in the drug squad.  He has also spent 3 years on secondment to the Central Liaison Office of the Regional Security System (RSS) as a Permanent Instructor where he had special responsibilities for Physical Training, Weapon Training and Internal Security,” the prime minister said, adding that “he has two degrees and professional training from the best policing institutions.”

The Strategic Plan 2016-2019 of the Royal St. Christopher and Nevis Police Force will be organized under four directorates led by the High Command of the Police.

Former Commander of the Nevis Division, Superintendent Hilroy Brandy has been appointed Deputy Commissioner of Police and has responsibility for the Service Improvement Directorate.

Deputy Commissioner of Police Hilroy Brandy brings to the table 35 years of police service and specialist experience in Crime Scene Investigation and Management, and investigative practice in Financial and Anti-money laundering matters.

Former Superintendent of Police Terrance James is now Assistant Commissioner of Police (ACP) with responsibility for the Operations Directorate.

ACP James has been with the police service for 29 years.  He has been posted to the Special Services Unit and the drug squad, and has been the acting commandant of the Police Training School and Commander of both “A” and “B” Divisions.

Superintendent of Police, Andre Mitchell has been appointed as Assistant Commissioner of Police and has responsibility for the Crime Directorate.

Andre Mitchell has 25 years in the Police service and brings experience of working in the Violent Crimes Unit.

Superintendent of Police, Merclyn Hughes, has been appointed as Assistant Commissioner of Police with responsibility for the Administration, Resources, Technology and Intelligence Directorate.

Merclyn Hughes, the lone female in the High Command, has 37 years of policing experience with a special focus on leading in strategic intelligence. Ms. Hughes has broken the glass ceiling. I hope her ascent provides inspiration to all local and regional females in the Police Force.

Prime Minister Harris commended Mr. Queeley, Mr. Brandy, Mr. James, Mr. Mitchell and Ms. Hughes on their new appointments and welcomed them to their new challenge, while reminding them that the nation holds them to the highest standards.

The Minister of National Security encouraged the new Police High Command to lead, inspire, and motivate, while asking them to be innovative.

“You must be tireless in ensuring that words, policies and strategies are converted into crime reduction. It is your responsibility for making our communities safer for citizens, residents, businesses and tourists. We the members of the public will work with you.

“What our Nation needs above all else from our Police Force is that long awaited, sustainable and tangible change of professional, lawful and positive action as you serve the public,” Prime Minister Harris told the new Police High Command.

The High Command of the Police will be placed on a 12 month probation.