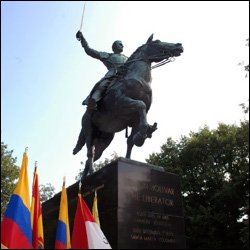 St. Kitts and Nevis has joined the call for hemispheric unity at an OAS session called to recognise the work, legacy, and influence of the liberator Simon Bolivar.

In a statement to mark the 226th anniversary of his birth of Bolivar, the Federation’s Permanent Representative to the Organisation of American States (OAS), His Excellency Dr. Izben C. Williams, who spoke on behalf of the CARICOM members, expressed that “the spirit of freedom that Bolivar inspired went beyond the coasts and the Andean regions, his successful fight infused a formidable search for the benefits of freedom.”

Ambassador recalled that in 1815, during his stay in Jamaica, Bolivar wrote the Charter of Jamaica, which he described as a “very important political doctrine in which he expressed his ideas on the republican government and the unity of Latin America.”

During the session, chaired by the Permanent Representative of Chile, Ambassador Pedro Oyarce noted that in May of 1986, the Council decided to institute July 24 as the official date to commemorate the birth of this “son of the Americas,” and said that the decision was based on Bolivar’s legacy, “of unity, ideals, and dreams.”

“The political dreams of the liberator for a continent with democratic stability in a framework of equality and freedom, of Latin-American integration, and of continental solidarity, were not possible at that time. However, the project of an American unity continues to be valid today as it was yesterday,” explained Oyarce. Then, he added that the work agenda of the OAS is inspired by the thinking of Bolivar and that today’s challenge is to “understand the profundity of his political message.”

Recalling the moments that marked the life of Simon Bolivar, the Ambassador of Peru, Maria Zavala, called for reflection. She affirmed that “this day of celebration should become a space for each one of us to discover or reencounter the ideas of the liberator through a dedicated and reflective lecture of his correspondence, manifestos, and declarations. All of them are unique sources of his thinking, and represent his true ideas, and hopes.”

She also mentioned that the story of Bolivar is “a life lesson for every citizen of the Americas, as well as a concrete testimony of motivation, and of permanent fight for growth,” and emphasized that “the most palpable work of this notable Venezuelan citizen an distinguished American was defined by his active, decided, and determined participation in the birth of the republics of Bolivia, Colombia, Ecuador, Peru, and of course his homeland Venezuela.”

Gathered at the OAS headquarters, in the room that takes the liberators name, the OAS member states also heard the words of Ambassador Virgilio AlcÃ¡ntara from the Dominican Republic, who affirmed that “Bolivar is our common history, a manifold symbol, a libertarian and independent symbol, and the symbol of Latin-American heroism.”

Ambassador AlcÃ¡ntara referred to Bolivar’s political and social legacy. He recalled the Bolivarian ideal of the need to “create a union of nations, not only to gain the strength and the power that the union gives, but also to increase the cooperation among them.” The Dominican diplomat affirmed that “this project is the most concrete and completed vision of what has become today this Organization, the Organization of American States.”

Prior to the meeting, the representatives of the OAS member states held a brief wreath-laying ceremony next to the Simon Bolivar monument, located in a park adjacent to the OAS headquarters in Washington, D.C.