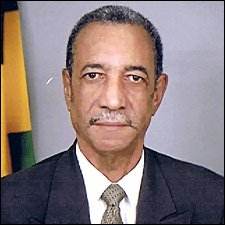 Ambassador Williams, St. Kitts and Nevis’ Ambassador to the United States and Dean and Chairman of the Caribbean Caucus of Ambassadors in Washington said that Ambassador Johnson has had a wide range of experience in politics, media, academia and the private sector.

“It is this background that he brought to bear on the affairs of the Council and this Organization on behalf of his country. It is this resourcefulness that we will be deprived of,” he said.

“We have all noted the passion and imperative which Ambassador Johnson brought to ensure our urgent response to the needs of Haiti in the aftermath of the earthquake, and his role in organizing the Memorial Service for the victims of the earthquakes in Haiti and Chile, which was held at the OAS,” Ambassador Williams said.

At a special sitting of the OAS Permanent Council, Ambassador Carmen Lomellin, who is Council Chair and US Ambassador to the OAS, declared that Ambassador Johnson has played a critical role in facilitating negotiations of sensitive topic that allowed member states to arrive at consensus.

She said Ambassador Johnson’s thorough grasp of policy and political matters, “combined with his ability as a skilled diplomat and orator and fuelled with the knowledge of a historian,” proved to be an invaluable asset to the Council, in bringing together representatives from different sub-“The Council wishes to register that your presence and contribution will be missed in this body. We wish you all the best in your future endeavours,” she said.

In his response, Ambassador Johnson, who was completing a 26-month assignment shared some perspectives on how the OAS could improve by examining itself to determine if its original goal, of “peace-keeper” among the countries “south of the border” should continue as its main focus.

“I suggest that the 19th century militarism which spawned the Pan American Union is no longer a widespread culture,” Ambassador Johnson argued.

The diplomatic community and the Jamaican community packed the Chancery to overflowing on Wednesday, April 28, 2010 to pay glowing tributes and heap heart-felt sentiments of praise on Ambassador and Mrs. Johnson.

Minister of State in Jamaica’s Ministry of Foreign Affairs, Senator the Hon. Marlene Malahoo Forte, addressed the large gathering of guests at the farewell function organized by the Embassy of Jamaica.

She lauded the Ambassador for his outstanding and distinguished public service and for the positive way in which he represented Jamaica in the United States.

Ambassador Johnson thanked the Jamaican community and the staff of the Embassy for their support over the 26 months.

He characterized his tenure in the American capital city as one marked by significant advances in deepening bilateral relationships between Jamaica and the US, as well as the forging of new relationships with Jamaican organizations and philanthropic groups across the host country.

Ambassador Johnson departed Washington D.C. on May 3, to take up his new posting as Jamaica’s High Commission to London on May 20.

He will be succeeded in Washington D.C. by businesswoman, Audrey Marks.