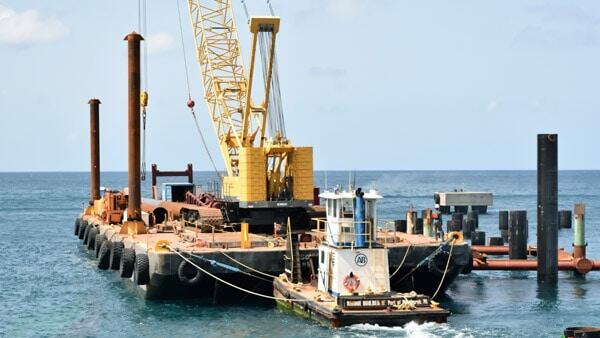 The second stage of the construction of the second cruise pier at Port Zante in Basseterre is now in full effect, said the Honourable Ian Patches Liburd, Minister of Public Infrastructure, during a media tour of the site on Friday, August 03.

American Bridge, a United States-based construction company, whose projects include a significant proportion of the world’s large bridges, marine installations and other complex structures, is currently in the Federation undertaking stage two of the construction, which involves piling work.

“They have already started the second stage of the project and having driven some test piles they are now on the ball and according to the schedules they are actually driving the construction piles and several have already been driven,” said Minister Liburd.

Tony Butyn, Project Manager for JV Driver, added that “in the next week or so” persons should see a good number of piles going up.

Minister Liburd expressed his delight in the progress of the second cruise pier and noted that it should be ready later next year.

“The second cruise pier will be completed barring no unfair weather in less than 15 months. I am advised this will be able to accommodate simultaneously two of the world’s largest ships, the Oasis Class ships,” said the minister, adding that the pier would be “60 feet wide and 670 feet long and is designed to withstand one in 100 years cycle storm.”

To date, there are just under 50 workers employed with the numbers expecting to go over 100 once construction progresses.

The commercial construction contract for building the second pier was signed between the St. Christopher Air and Sea Ports Authority (SCASPA) of the Government of St. Kitts and Nevis and the Canadian Commercial Corporation (CCC), a crown agent of the Government of Canada, which is the prime contractor with JV Driver (JVD), being the prime subcontractor. SCASPA’s engineer is AdeB Consultants working alongside the Director of Public Works, Mr. Cromwell Williams. The Lender’s Engineer is EF Douglas and Associates, with Principal Consultant Errol Douglas.