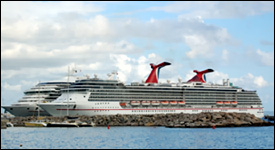 St. Kitts welcomed the first ship for the official 2010/20111 Cruise Ship Season last Friday October 8th with the arrival of the 105,000-tonne Carnival Victory, which has been berthing at Port Zante every Friday during the summer.

The first ship scheduled was the 3,070-passenger Emerald Princess on October 5th but the inclement weather prevented it from berthing.

The 3,050-passenger capacity Carnival Victory arrived from St. Lucia last Friday with 3,098 passengers, among them a 400-strong contingent of grandparents, parents, teachers and students from the Dutch Caribbean island of Curacao and several from neighbouring St. Maarten. The Victory was scheduled to dock in St. Maarten on Saturday, but spent the day at sea instead as it was unable to dock.

The cruise ship season continues this week with the arrival of the 2,038 passenger capacity Celebrity Millennium on Wednesday 13th October and the 3,050-passenger Carnival Victory on Friday 15th October.